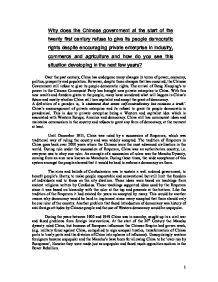 Why does the Chinese government at the start of the twenty first century refuse to give its people democratic rights despite encouraging private enterprise in industry, commerce and agriculture?

Why does the Chinese government at the start of the twenty first century refuse to give its people democratic rights despite encouraging private enterprise in industry, commerce and agriculture and how do you see this situation developing in the next few years? Over the past century, China has undergone many changes in terms of power, economy, politics, prosperity and population. However, despite these changes that has occurred, the Chinese Government still refuse to give its people democratic rights. The arrival of Deng Xiaoping's to power in the Chinese Communist Party has brought new private enterprise to China. With this new wealth and freedom given to the people, many have wondered what will happen in China's future and mostly whether China will turn capitalist and accept the grant of democracy. A definition of a paradox is, 'a statement that seems self-contradictory but contains a truth'. China's encouragement of private enterprise and its refusal to grant its people democratic is paradoxical. This is due to private enterprise being a Western and capitalist idea which is associated with Western Europe, America and democracy. China still has communist ideas and maintains communism in the country and refuses to grant any form of democracy, at the moment at least. Until December 1911, China was ruled by a succession of Emperors, which was traditional way of ruling the country and was widely accepted. The tradition of Emperors in China goes back over 2000 years where the Chinese were the most advanced civilisation in the world. During rule under the succession of Emperors, China was an authoritarian country, i.e. everyone was to obey one ruler. An example of a succession of rulers was the Manchu Dynasty, coming from an area now known as Manchuria. During these times, the wide acceptance of this system amongst the people showed that it would be hard to enforce a democracy on them. The aims and beliefs of Confucianism was to sustain a well ordered government, to benefit people's liberty, to make people respectable and conventional but still limit the freedom of individuals and to focus on the city dwellers. ...read more.

However this caused much criticism towards Mao and the 'Hundred Flowers' was rapidly stopped. In the summer of 1958, Mao was determined to turn China into the worlds leading industrial nation whilst improving her agriculture. He called his plan the 'Great Leap Forward'. Unlike the first Five-Year Plan, the Great leap forward aimed to develop agriculture as well as industry, both heavy and light at the same time. To achieve this, the Chinese people were organised to communes. The purpose of this was to release what Mao called 'the tremendous energy of masses' by ensuring that time and effort were not wasted and that each worker in the commune could work at a variety of tasks. Another key element to the Great Leap Forward was propaganda. The Party and government tried everything to keep up enthusiasm for the Chinese people to work such as newspaper articles, posters, and slogans. Although communes were expected to contribute, there was a spectacular rise of produce due to the backyard steel campaign. This was by the effect of small commune factories to help in bigger industrial products such as producing steel, fertilisers, cement etc. However, only months after Mao's launch of the Great Leap Forward, things began to turn dreadfully wrong. Because of being forced to work harder and faster, old and overworked machines broke and exhausted workers fell asleep at work and often causing accidents. The backyard steel campaign also began to fail; 3 million tonnes of the steel made was to impure for use and turned to scrap, the amount of furnaces made meant that 1 in 10 workers were always on, taking a large amount of people away from the fields producing food. Furnaces used up huge amounts of coal which where needed for transport such as trains and the so much extra steel produced was made meant that there was not enough for trains to take it away. Even Mao had to admit to his people that his Great Leap Forward was a disaster. ...read more.

Secondly, the current popularity for the communist party in China, despite being a small percentage of the population, over 38 million people belong to the CCP. The reluctance of foreign policies, despite the idea being old, many Chinese people still have an anti foreign attitude due to their traditions and ancient ancestral belief. Another reason why China remains communist is because it already is. Communism has benefited China greatly, 'if its not broken don't bother fixing it'. There appears to be no real desperate need for change and will remain like this for a long period of time. Also, the government control most ideas in China. It is their decision what China becomes and they have more authority than the public. Finally, an important reason that deters the government from allowing China to become a democracy is the effect it may put on China. Like Russia when it turned from a communist state to a capitalist one, it suffered years of chaos, anarchy and civil war. It turned Russia into a ruined third world country after being a great world power. The government fear a result of chaos. To say the truth, the government are 'scared' of democracy. However there still remain few factors that can turn China around into a capitalist state and open up its door for democracy. Over the recent years, China has slowly begun to drift away from their strict Communist rules. As the people of China are gaining more economic rights, they will begin to demand more rights such as political ones. Also more Chinese are finding out of new capitalist and foreign ideas due to technology such as transport around the world, books and the Internet. Finally, there is the possibility of the public to turn against Communism and revolt as happened in Russia. Despite there being private enterprise, I still do not believe that China will allow democratic rights for their people due to their traditions, its authoritarian rule, their current power they already hold and because of the failures of other ex communists countries. 1 ...read more.