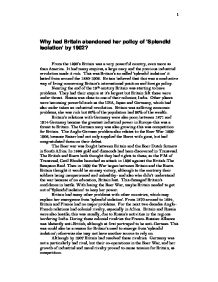 Why had Britain abandoned her policy of 'Splendid Isolation' by 1902? From the 1890's Britain was a very powerful country, even more so than America. It had many empires, a large navy and the previous industrial revolution made it rich. This was Britain's so called 'splendid isolation' it lasted from around the 1880-1902. Britain believed that this was a conductive way of living concerning Britain's international position and foreign policy. Nearing the end of the 19th century Britain was starting to have problems. They had their empire at it's largest but Britain felt these were under threat. Russia was close to one of their colonies; India. Other places were becoming powerful such as the USA, Japan and Germany, which had also under taken an industrial revolution. ...read more.

In 1886 gold and diamonds had been discovered in Transvaal. The British and Boers both thought they had rights to these, so the P.M of Transvaal, Cecil Rhodes launched an attack in 1896 against the British-The Sampson Raid. Then in 1899 the War began between Britain and the Boers. Britain thought it would be an easy victory, although to the contrary their soldiers being inexperienced and unhealthy- and also who didn't understand the war because of no education, Britain lost. This damaged Britain's confidence in battle. With losing the Boer War, maybe Britain needed to get out of 'Splendid isolation' to keep her power. Britain had many other problems with other countries, which may explain her emergence from 'splendid isolation'. ...read more.

Although by 1907 Britain had resolved these rivalries. Germany was not a particularly bad rival, but their co-operations in the Boer War, and her growth of industrial and naval rivalry proved to cause tension for Britain, as competition. On January 30th, Japan and Great Britain signed a treaty of a military alliance. The provisions stated that if two or more countries attacked either country, the co-signatory was committed to go to war. This agreement was aimed primarily at Russian expansion, which both Britain and Japan felt to be a dominating threat. This was unusual for British policies. Some may argue that this was the end of 'Splendid Isolation' for Britain; otherwise it may be argued that this wasn't the end of 'Splendid Isolation' for Britain, but it was Europe that was isolated, and Britain's policy of 'Splendid Isolation' did not end. ?? ?? ?? ?? 1 ...read more.