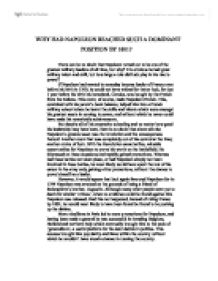 Why Had Napoleon Reached Such a Dominant position by 1801?

WHY HAD NAPOLEON REACHED SUCH A DOMINANT POSITION BY 1801? There can be no doubt that Napoleon turned out to be one of the greatest military leaders of all time, but why? It is obvious he had great military talent and skill, but how large a role did luck play in his rise to power? If Napoleon had wanted to someday become leader of France even before his birth in 1769, he could not have wished for better luck, for just 1 year before his birth his homeland, Corsica, was bought by the French from the Italians. This event, of course, made Napoleon French. This, combined with his parent's bank balance, helped him into a French military school where he learnt the skills and talents which were amongst his greatest assets in coming to power, and without which he never could have made his remarkable achievements. But despite all of his expensive schooling and no matter how good his leadership may have been, there is no doubt that above all else Napoleon's greatest asset was the revolution and the consequences thereof. ...read more.

This success brought him popularity and fame within the country without which he wouldn't have stood a chance in running the country. But it wasn't only his personal attributes and his luck that was in Napoleon's favour, because back in France, the Directory who had been running the country since The Terror were doing a poor job, providing Napoleon with just the opportunity he needed to come in and seize power. Which he eventually did in 1799, with a certain amount of help from within the Directory. But it was what he did as soon as he came into power that really gave him a strong base and showed his dominance, for he immediately introduced a new set of laws (the Code Napoleon) as well as setting up a national bank which really stamped his authority on what was going on. The National Bank also helped to keep the economy stable and so prevented Napoleon from being exposed financially. Having sorted out his affairs within France, and the crucial thing if he was to stay in power, the next thing on his agenda was to defeat the second coalition. ...read more.

In Napoleon's case it was his personality that lead to these things, Napoleon we know was arrogant and decisive, which is a good quality for both a military and national leader as this means that he liked to take a look at a situation and make a decision instead of maybe waiting and then making up his mind. Having a strong leader such as this is also good for the morale of troops as they will know exactly what to do and when with no one second guessing the leader. A strong leader is also exactly what France needed at the time to sort out the economy and foreign affairs following the weak rule of the directory. Napoleon's luck certainly had a fair amount to do with his success, but that is not unexpected for 'fortune favours the brave', and Napoleon was certainly never one to duck out of a fight. Undoubtedly Napoleon would never have achieved so much in such a short period of time if he were short in military prowess or courage. Napoleon was a man with drive who had both skill and luck as a military commander and by this point had embarked on his main aim to revolutionise French society (education, law, infrastructure). ...read more.