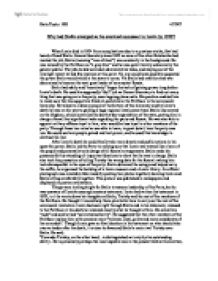 Why had Stalin emerged as the eventual successor to Lenin by 1929?

Why had Stalin emerged as the eventual successor to Lenin by 1929? When Lenin died in 1924 from complications due to a previous stroke, few had heard of Josef Stalin. General Secretary since 1922 as none of the other Bolsheviks had wanted the job, Stalin (meaning "man of steel") was constantly in the background. He was viewed by the Politburo as "a grey-blur" and he was quite literally unknown by the general public. The jobs he did were dull administrative tasks, and staying out of the limelight meant he had few enemies at this point. No one could have possibly suspected the power Stalin would wield in the years to come. Yet Stalin had ambition and was determined to become the next great leader of communist Russia. Stalin had subtly and "secretively" begun the task of gaining power long before Lenin's death. He used his supposedly "dull" job as General Secretary to find out every thing that was going on in the party, even tapping phone calls. His position enabled him to make sure that his supporters filled all posts below the Politburo in the communist hierarchy. He talked to ordinary people at the bottom of this hierarchy and by Lenin's death he was on his way to gaining a huge regional level power base. Stalin also served on the Orgburo, which controlled the day-by-day organisation of the state, putting him in charge of small but significant tasks regarding the party and Russia. ...read more.

When Lenin's testament was given to the Politburo and read aloud in a meeting on May 24th, Stalin's hopes of becoming leader suddenly looked grim. Fortunately for Stalin a member of the Party spoke in his defensive, highlighting his role in organising Lenin's funeral. The other members of the Politburo disliked the "ruthless" Trotsky and thought if given sole control he would establish a military dictatorship. This allowed Stalin to keep his job, going against Lenin's will. The testament was never released to the public and it turned out to be the biggest mistake the remaining members of the Politburo would ever make. With his position inside the party secure, Stalin began to solidify his power. He knew he'd have to be even more brutal and manipulative than he had previously thought to gain complete power. He had huge ambition and he was prepared to do anything possible to achieve his dream of being Lenin's successor. His greatest adversary was Trotsky, who he battled on the direction the revolution should take, now that Lenin was dead. Trotsky wanted to spread the revolution around the world as Karl Marx had predicted. Stalin argued that the Party must protect and rebuild Russia first. The Politburo was divided into two groups: the "leftists", those who wanted hard-core communism and a "permanent revolution", and the "rightists", those who favoured Lenin's NEP (new economic policy). ...read more.

He used the state police, known as the Cheka as his main tool of enforcement. The name was short for the Extraordinary Commission for Combating Counter-Revolution, Sabotage, and Speculation. This organization was created by Lenin to protect the communist dream from those who did not believe in the goals of the Party. Yet, Stalin targeted almost any one, even those who supported communism and the Party. Finally, he made sure there was no doubt in the Russian people's minds by using powerful imagery and propaganda to make it appear that he was the "Lenin of his time" and the "true successor" to Lenin's role. In conclusion, it is clear that there was no single event that allowed Stalin to achieve his role as absolute leader of Russia. It was more a combination of factors resulting in a chain of events, together with Stalin's harsh character and determined ambition that allowed him to take such complete control. However, if one main factor had to be isolated as the primary cause it would have to be the mistake of the other members of the Politburo not releasing Lenin's testament. This allowed Stalin's harsh character and brutal methods to go on relatively unnoticed and unchecked. Given these conditions it is very unlikely that circumstances would combine in such a way again, making it unlikely for such a leader to be able to arise in today's Europe. Katie Taylor 10H 4/27/07 ...read more.