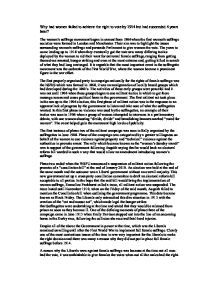 Why had women failed to achieve the right to vote by 1914 but had succeeded 4 years later?

Why had women failed to achieve the right to vote by 1914 but had succeeded 4 years later? The women's suffrage movement began in earnest from 1866 when the first women's suffrage societies were formed in London and Manchester. Their aim was to highlight the issues surrounding women's suffrage and persuade Parliament to give women the vote. The years to come leading up to 1918 when they eventually got the vote saw many differing tactics deployed by the women to aid their want for universal female suffrage, ranging from getting themselves arrested, hunger striking and even at the most extreme end, getting killed in search of what they had long envisaged. It is arguable that the most important event in the suffragette movement was the outbreak of the First World War, where the women became a prominent figure in the war effort. The first properly organised party to campaign nationally for the rights of female suffrage was the NSWS which was formed in 1868, it was an amalgamation of locally based groups which had developed during the 1860's. The activities of these early groups were peaceful and it was not until 1906 when these groups began to use militant tactics in which to get there message across and cause political harm to the government. ...read more.

One of the defining moments of phase three of the campaign came in June 1913 when Emily Davison stepped out into the line of an oncoming horse in the Derby race, following the collision she received fatal head injuries. Despite all of the above the Government in power at the time, which was the Liberals remained unwilling until after the First World War to implement full female suffrage. Clearly one of the most contentious issues of the time in was very important for the liberals to make the right decision and there was many a reason why they did not put in place full female suffrage before 1914. A reason why the Liberals were against female suffrage was because at the time not all men had the vote, it was unthinkable to give females the votes when not all the males had the right. The liberals though however would no jump to the opportunity to grant full male suffrage because the group of males who could not vote were the working class. The liberals new that if this group of society was given the vote, that they would more than likely vote for the liberals rival, the Labour party. The working class also held very strong view regarding women's right to the vote, as in that area of society there was an inherit believe that women were inferior. ...read more.

It is possible that the vote was just in fact a continuation of the way in which the issue had been moving before the war. There was a similar vote in 1911 to that held in 1917, and of the 194 MP's who voted for the bills in both 1911 and 1917, only 22 had changed their stance. 14 had changed to being in favour of female suffrage and 4 changed from being for female suffrage in 1911 to being against it in 1917. Hence this evident it seems likely that the direction Parliament were moving pre 1914 was a more significant factor in the 1918 bill being past. So it is possible that the work done before the war by the suffragettes than the work they did during the war. In France to use an example, the women did a huge amount during the war effort, working in factories and farms, however they did not see any political suffrage rights following the war. There was though in France no history of women fighting for their political rights before the war. Parliament may have also been concerned that the militancy seen before the war might return following the war, they would have been made more concerned with the Russian overthrow of the tsar in February 1917 and the Bolshevik take over of Russia at the for front of their mind ...read more.