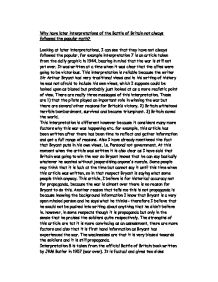 Why have later interpretations of the Battle of Britain not always followed the popular myth?

Why have later interpretations of the Battle of Britain not always followed the popular myth? Looking at later interpretations, I can see that they have not always followed the popular, for example interpretation 7 is an article taken from the daily graphic in 1944, bearing in mind that the war is still not yet over. It was written at a time when it was clear that the allies were going to be victorious. This interpretation is reliable because the writer Sir Arthur Bryant had very traditional views and in his writing of history he was not afraid to include his own views, which I suppose could be looked upon as biased but probably just looked at as a more realistic point of view. There are really three messages of this interpretation. These are 1) that the pilots played an important role in winning the war but there are several other reasons for Britain's victory. 2) Britain withstood terrible bombardment, survived and became triumphant. 3) Britain saved the world. This interpretation is different however because it considers many more factors why this war was happening etc. for example, this article has been written after there has been time to reflect and gather information and get a full range of reasons. ...read more.

war and I think that by writing this it is like his final word or what happened, coming from the prime minister is therefore going to be to the public "the truth" and maybe Churchill thought that by doing this it would stop so many different interpretations about the war. However, this was not going to be the case with such a big change in history, it was inevitable that there would be many interpretations and that they would not all be sticking to the earlier popular interpretation of "the few" and "their finest hour". The strengths of this are that there are more factors and more concentrated on Russia, and the fact that it is written by the most influential figure from the war at this time. It is also therefore going to be well researched and a good historical view despite all I have said. The weaknesses of this are that it is biased slightly as most things will be- depending who wrote it, and that Churchill fails to mention Dowding at all and the fact that he played a huge part in helping the RAF but because Churchill didn't get on with him at all he felt it far more important to talk about Lord Beaver Brook- his good friend. ...read more.

To stir up emotion and to be controversial? Maybe it was just to inform people that there was another side to what they believed in already and to sell this new information to students is much more effective because they are going to be open minded because they were not involved in the war obviously and they are most likely not to be biased. It was a new version of the Battle of Britain openly published, and it is saying aswel that the myth was highly distorted. It is not so much an argument that this is being brought to a discussion but more of a debate. Clearly this is easily achieved now as the war is many years over and people are willing to look at it from another perspective. The strengths are that it is well researched and accurate historically, it is also the first to discuss that the popular myth may have been taken out of context over the years- and that others have suggested this. The weaknesses are that is this his own idea to get the students active in having an open mind to interpretation or was he being serious in what he was saying. Another thing is that he omitted glorifying the pilots in any way and didn't mention that of course they had something to do with the British winning the war. ...read more.