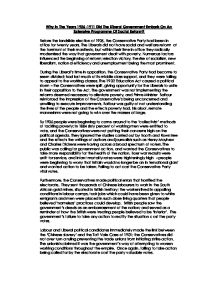 Why In The Years 1906-1911 Did The Liberal Government Embark On An Extensive Programme Of Social Reform?

Why In The Years 1906-1911 Did The Liberal Government Embark On An Extensive Programme Of Social Reform? Before the landslide election of 1906, the Conservative Party had been in office for twenty years. The Liberals did not have social and welfare reform at the forefront of their manifesto, but within their time in office they radically modernised the way that government dealt with poverty. Numerous factors influenced the beginning of reform; election victory, the rise of socialism, new liberalism, national efficiency and unemployment being the most prominent. During the Liberal's time in opposition, the Conservative Party had become to seem divided; had lost much of its middle class support, and they were failing to appeal to the working classes. The 1902 Education Act caused a political storm - the Conservatives were split, giving opportunity for the Liberals to unite in their opposition to the Act. The government was not implementing the reforms deemed necessary to alleviate poverty, and Prime Minister Balfour reinforced the impression of the Conservative's being unconcerned and unwilling to execute improvements. Balfour was guilty of not understanding the lives of the people and the effects poverty had, his aloof, remote mannerisms were not going to win over the masses at large. By 1906 people were beginning to come around to the 'collectivist' methods of tackling poverty; in 1884 sixty percent of working men were entitled to vote, and the Conservatives were not putting their concerns high on the political agenda. ...read more.

By the end of the 1800s, the efficiency of the general populous was questionable, and many people believed only government intervention and social reform could effectively tackle the problem. Foreign economies were thriving, and the British government was faced with the results of the studies conducted by Booth and Rowntree, which undeniably proved that the poverty and squalor of the working classes was often through no fault of their own, and government involvement on a national scale was needed if the issue was to be addressed. It was realised that if poverty were dealt with then the lowest classes of society would be better capable of making a positive contribution to the country. People were most alarmed at the fact that Britain's military might may be damaged because those who volunteered to fight were deemed physically unfit for service. A government Inter-Departmental Committee on Physical Deterioration blamed the unhealthy state of children on parents providing less than adequate care. Industrialists were relying on skilled workers who needed to be content enough to work hard. The fight to improve national efficiency needed to be based on welfare reforms, and it also helped in the development of New Liberalism. Radical or more modern liberals such as Churchill and Lloyd George were key figures in shaping Liberal reforms, and the emerging of New Liberalism, in contrast to the previous 'Gladstonian Liberalism'. ...read more.

As a result, the 1909 Labour Exchanges Act was passed; unemployed men were able to visit their local exchange and be advised on vacancies in their specific trade. The poor law was no longer believed to be an efficient or effective way to tackle unemployment, and the Liberals looked for a way to provide maintenance for those out of work. A national unemployment insurance scheme was incorporated into the 1911 health insurance Act. It did not cover all trades; just those prone to seasonal work. In the years 1906 - 1911, the Liberal party embarked on an extensive, but unplanned programme of social reform in response to the social climate of the times. The rise of socialism in the form of the labour party was believed to have the possibility of becoming a powerful force of opposition to the liberals, the economy was suffering and the nation as a whole was seen as inefficient, people were not fit for purpose and the levels of unemployment throughout the country were crippling. New Liberalism was a radical branch of the Liberal party that focused on ideals such as collectivism, positive freedom and state intervention, and believed them to be the most effective ways to tackle the issue of welfare and social reform. Although New Liberalism was not popular with Liberal party members at the time of the landslide victory, influential men such as Churchill and Lloyd George became pioneers in later years, and under Herbert Asquith (Prime Minister 1908-1916) a successful period of reform began. ...read more.