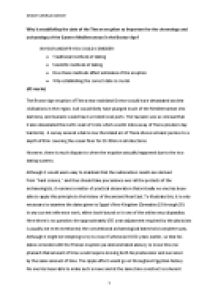 Why is establishing the date of the Theran eruption so important for the chronology and archaeology of the Eastern Mediterranean in the Bronze Age?

﻿GRACE CANELLE-DANCE Why is establishing the date of the Theran eruption so important for the chronology and archaeology of the Eastern Mediterranean in the Bronze Age? IN YOUR ANSWER YOU COULD CONSIDER: 1. Traditional methods of dating 2. Scientific methods of dating 3. How these methods affect estimates of the eruption 4. Why establishing the correct date is crucial. (45 marks) The Bronze Age eruption of Thera near mainland Greece would have devastated ancient civilisations in the region. Ash would likely have plunged much of the Mediterranean into darkness, and tsunami would have wrecked local ports. The tsunami was so colossal that it also devastated the north coast of Crete which was 68 miles away of Thera (modern day Santorini). A survey around what is now the island arc of Thera shows volcanic pumice to a depth of 80m covering the ocean floor for 20-30km in all directions. However, there is much dispute to when the eruption actually happened due to the two dating systems Although it would seem easy to maintain that ...read more.

There is a consequence to this that follows logically and which will be fought desperately by those who realize where this logic is leading. It means that other radiocarbon dating from the middle of the second millennium BC must, if the archaeologists are right, also be brought down by the approximately 150 years that the Thera event must be brought down. This includes the date of Jericho City IV, the city that has every other mark of being in the right place at the right time to correspond to the Jericho of Joshua chapter 6. Currently, the strongest (indeed, almost the only) argument against City IV being the city taken by Joshua is that grain from the full storage jars there has been radiocarbon dated to 1550 BC, in agreement with the dating for the site given by Kathleen Kenyon. But if the Egyptologists are right (and that they are right is conceded implicitly by all encyclopedias, including those that are hostile to the Biblical account), then this date must be reduced by about 150 years to around 1400 BC, the time that Garstang and Bryant Wood maintain is mandated by the Biblical evidence. ...read more.

In a sense, however, this is secondary to the consequence that the required down-dating of radiocarbon dates for the 15th and 16th centuries BC means that Kenyon's date for the destruction of Jericho City IV could no longer be maintained. For those who are not willing to follow this logical conclusion, it would be reasonable to put in abeyance all judgments on the radiocarbon question for the 2nd millennium BC, relying instead on the archaeological (including ceramic) arguments until the conflict between the physicists and the archaeologists is resolved one way or another. This would mean that reliance must be placed on the other determinatives of the chronology of the time, whether for Egypt or Canaan. These other arguments definitely support the conventional chronology of Egypt and the surrounding countries. They also support a date for the fall of Jericho City IV in the latter half of the 15th century BC, once the main prop for Kenyon's date, the radiocarbon argument, is put in abeyance or (as seems more likely) is negated altogether. ...read more.