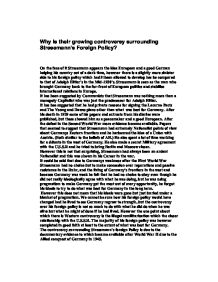 Why Is Their Growing Controversy Surrounding Stresemann&amp;#146;S Foreign Policy?

Why is their growing controversy surrounding Stresemann's Foreign Policy? On the face of it Stresemann appears the idea European and a good German helping his country out of a dark time, however there is a slightly more sinister side to his foreign policy which had it been allowed to develop has be compared to that of Adolph Hitler's in the Mid-1930's. Stresemann is seen as the man who brought Germany back to the for-front of European politics and stabilise international relations in Europe. It has been suggested by Communists that Stresemann was nothing more than a monopoly Capitalist who was just the predecessor for Adolph Hitler. ...read more.

(Both similar to the beliefs of AH.) He also spent a lot of time working for a d�tente in the west of Germany. He also made a secret Military agreement with the U.S.S.R and he tried to bring Berlin and Moscow closer. However this is not that surprising, Stresemann had always been an ardent Nationalist and this was shown in his Career in the war. It could be said that due to Germanys weakness after the First World War Stresemann had no choice but to make concession over reparations and passive resistance in the Ruhr, and the fixing of Germany's frontiers in the west and because Germany was week he felt that he had no choice to obey ...read more.

We cannot be sure how his foreign policy would have changed had he lived to see Germany regrow to strength, but the controversy over his foreign policy is not so much to do with what he did do when he was alive but what he might of done if he had lived. However the one point about which there is Western controversy is the illegal remilitarisation which the closer relationship with the U.S.S.R. The majority of his foreign policy was however completed in good faith at least to the extent of what was best for Germany. The controversy surrounding Stresemann's foreign Policy is due to the documentary evidence to which became available after World War II due to the Allied conquest of Germany in 1945. ...read more.