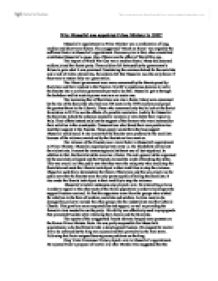 Why Mussolini was appointed Prime Minister in 1922?

Why Mussolini was appointed Prime Minister in 1922? Mussolini's appointment as Prime Minister was a combination of long, medium and short-term factors. The exaggerated 'March on Rome' was arguably the sufficient factor in Mussolini's appointment. However prior to that, other events had contributed Mussolini's cause. One of them was the effect of World War one. The impact of World War One was a medium factor. Many disillusioned soldiers joined the fascist party. These soldiers felt betrayed by the government's failure to gain what it was promised. Considering the common hatred for the socialists and a lack of viable alternatives, the soldiers felt that Mussolini was the only choice if they were to restore Italy as a great nation. The Liberal government were more concerned by the threats posed by Socialism and their mistrust in the Popolari. ...read more.

The violence of the Fascists was a main factor in Mussolini's appointment as Prime Minister. Mussolini organised private army i.e. the Blackshirts carried out the violent acts. It meant the increasing socialist threat was all but wiped out. In addition to that, the Socialist strike was also a factor. The anti-general strike organised by the socialists collapsed and the Fascists claimed the credit of breaking the strike. This was crucial as it the public saw that they were the only party who could stop the Socialists and made the Liberals look abject in their inabilities to stop the violence. Mussolini used this to demonstrate the threat of Socialism and this was crucial as the public saw that the fascists were the only party capable of halting the Socialists. It also made the liberals look abject in their inability to stop the violence. ...read more.

Following this Facta resigned heaving more problems on the king. King Victor Emmanuel II also played a role in Mussolini's appointment. He rejected Facta's proposal of martial law after Marshal Diaz suggested that the army wasn't strong enough to fight the Fascists. Like many of the prefects the King overestimated the power of the Fascists. He was concerned that the army and the country may have divided to spark a civil war, as many of his generals sympathised with the Fascists. He also feared being overthrown and replaced by his cousin (Duke Aosta) who would be seen as more likely to give in to the Fascists. His lack of confidence invariably suggested that he could see no alternatives other than Mussolini. Following Facta's resignation, Mussolini was appointed Prime Minister. However it could have been a different story if the prefects had accurately measured the real potency of the fascists. The King's lack of faith in the army was also another factor and his appointment proved to be fatal error. ...read more.