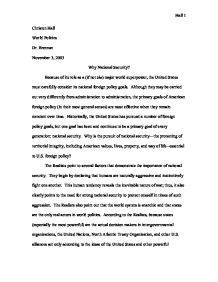 Christen Hall World Politics Dr. Brennan November 3, 2003 Why National Security? Because of its role as a (if not the) major world superpower, the United States must carefully consider its national foreign policy goals. Although they may be carried out very differently from administration to administration, the primary goals of American foreign policy (in their most general senses) are most effective when they remain constant over time. Historically, the United States has pursued a number of foreign policy goals, but one goal has been and continues to be a primary goal of every generation: national security. Why is the pursuit of national security-the protecting of territorial integrity, including American values, lives, property, and way of life--essential to U.S. foreign policy? The Realists point to several factors that demonstrate the importance of national security. They begin by declaring that humans are naturally aggressive and instinctively fight one another. This human tendency reveals the inevitable nature of war; thus, it also clearly points to the need for strong national security to protect oneself in times of such aggression. ...read more.

in order to ward off war. If the U.S. appears to or does have a weak national security system, other countries may attack. An attack could destroy much of American territorial integrity: lives might be lost; property would most likely be damaged; the American way of life could be replaced by that of its conquerors. Autonomy might even be lost in war. Therefore, U.S. focus on national security helps avoid war and, thus, helps maintain territorial integrity. Maintaining territorial integrity is especially important to U.S. foreign policy in that it allows the U.S. to accomplish secondary policy goals like the promotion of democracy and human rights and the extension of aid to suffering countries. If the U.S. were unable to maintain autonomy, it would be impossible to carry out these objectives. The Realist arguments are not unaided. Abraham Maslow's hierarchy of needs also points to the importance of national security.1 The hierarchy explains the process of moving toward self-actualization, the peak of human fulfillment. Maslow's hierarchy begins with physiological needs-food, water, shelter, sleep, sex, etc. ...read more.

National security continues to rank high in importance, because of the real threat of such unanticipated attacks. The U.S. has no way of knowing who might attack next and when they might attack; therefore, American national security continues to be undeniably important. These arguments show why national security is an imperative part of American foreign policy. The Realist viewpoint demonstrates a country's need to protect its territorial integrity amidst world anarchy, Maslow's hierarchy of needs illustrates the important role of fulfilling safety needs in order to self-actualize, and recent attacks on U.S. soil reveal the real threat to American national security that remains today. If the United States is to continue to be a world superpower, it must ensure that American values, lives, property, and way of life are in no way undermined. One can see that making national security its primary goal in foreign policy will help the United States make certain that it continues to be a formidable force in world politics. 1 All information on Maslow's hierarchy is from a Yahoo word search: Maslow's hierarchy of needs. Hall 1 ...read more.