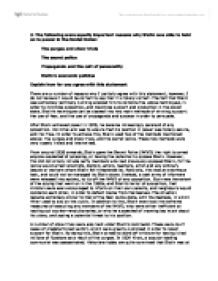 Why Stalin was able to hold on to power in the Soviet Union: The purges and show trials The secret police Propaganda and the cult of personality

3. The following were equally important reasons why Stalin was able to hold on to power in the Soviet Union: The purges and show trials The secret police Propaganda and the cult of personality Stalin's economic policies Explain how far you agree with this statement There are a number of reasons why I partially agree with this statement, however, I do not believe it would be correct to say that it is totally correct. The fact that Stalin was extremely politically cunning enabled him to combine the above techniques, in order to minimise opposition, and maximise support and production in the soviet state. Stalin's techniques can be classed into two main methods of winning support: the use of fear, and the use of propaganda and success in order to persuade. After Stalin achieved power in 1928, he became increasingly paranoid of any opposition. His initial aim was to ensure that his position in power was totally secure, and risk free. In order to achieve this, Stalin used two of the methods mentioned above: the purges and show trials, and the secret police. These two methods were very closely linked and intertwined. ...read more.

After realising that Lenin's idea of trying to persuade the Peasants to join collective farms was not working fast enough, Stalin decided that a far more ruthless process was required, in order to produce enough food to support an increasing amount of workers in industry. To begin with, Stalin tried Lenin's tactic of persuading peasants, however after they heavily resisted, Stalin became far more brutal. Over 5 million kulak families are thought to have died in labour camps, along with anyone who tried to defend them. Eventually, Stalin achieved the results he wanted, and by 1935, 94 percent of agricultural land had been collectivised, and the kulak class eliminated, however the brutal way in which this process was carried out meant that it was greatly resented by many. On the industrial front, Stalin set about introducing the first Five-year Plan, from 1928 until 1932. This was a regime intended to last for five years, in which GOSPLAN, the State planning Commission constructed a list of ambitious targets to develop industry, power supply, and transport. The basic aim of the plan was to shift Russia away from agriculture slightly, and move more into industry. ...read more.

For example, Stalin used the show trials, in which he had many counter-revolutionaries falsely accused of murder, as a means of propaganda, to deflect criticism from himself. The secret police were also heavily involved in the three other methods of maintaining power. They ensured that Stalin's propaganda campaign ran smoothly, arrested anyone failing to keep up with the pace of Stalin's economic policies, and were actively involved in the purges and show trials, to such an extent that some became victims and were exiled or executed. I also believe that Stalin's economic polices were partially due to the stress placed on the economy by the costly purges. It is therefore possible to see how all of the reasons why Stalin was able to hold onto power in the Soviet Union were very much dependant on each other. However, I do believe that propaganda was a rather unimportant contribution to Stalin's success, after he had achieved power in 1924. Whilst Stalin did a good job of controlling the media and presenting himself well to the Russian people and the rest of the world, many Russians were not really given a choice in the first place. Therefore I believe that even without propaganda, it could have been possible for Stalin to maintain power, due to the way people were strictly monitored and intimidated by the secret police. ...read more.