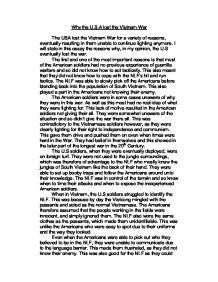 Why the U.S.A lost the Vietnam War

Why the U.S.A lost the Vietnam War The USA lost the Vietnam War for a variety of reasons, eventually resulting in them unable to continue fighting anymore. I will state in this essay the reasons why, in my opinion, the U.S eventually lost the war. The first and one of the most important reasons is that most of the American soldiers had no previous experience of guerrilla warfare and so did not know how to act tactically. This also meant that they did not know how to cope with the NLF's hit and run tactics. The NLF was able to slowly pick off the Americans before blending back into the population of South Vietnam. This also played a part in the Americans not knowing their enemy. The American soldiers were in some cases unaware of why they were in this war. As well as this most had no real idea of what they were fighting for. This lack of motive resulted in the American soldiers not giving their all. They were somewhat unaware of the situation and so didn't give the war there all. This was contradictory to the Vietnamese soldiers however, as they were clearly fighting for their right to independence and communism. This gave them drive and pushed them on even when times were hard in the War. ...read more.

The average age for an American soldier in the Vietnam War was just 18/19. This statistic alone shows how young the majority of the soldiers were, and suggests that they were just kids sent out into an area they didn't know, to fight an enemy they couldn't find. On top of this they had no motive for being there and were probably intimidated by the surroundings, as well as the unidentifiable enemy. One of the biggest reasons that America didn't win the Vietnam was due to the propaganda issues that continued throughout the war. It all began in December 1966 when Vietnam decided to allow the first American journalist into the country. This was a good move by the Vietnamese, as they knew that the Americans, with the heavy bombing and use of weapons, would be more than likely to slip up and so therefore kill civilians, even though it may be accidental. Letting the American press, with their lack of restrictions on what they could print, into the country allowed the press to broadcast the atrocities that were occurring during this period. Graphics images and videos were sent back to the United States, leading to the American people wondering why they were fighting this War and whether it was all really worth it. ...read more.

This therefore made the Vietnamese population more inclined to support the NLF. Probably the biggest reason that the Americans lost this War was because they underestimated the NLF. They didn't realise how determined the Vietnamese were to gain independence, and how being ruled by another country for so long had taken its toll on the people. The Vietnamese people had a huge motive of fighting for independence, and were determined to battle and overcome the Americans. They refused to give up and gradually disposed of parts of the American army. The final blow was landed on the American government when the NLF launched the 'Tet Offensive'. The Vietcong captured 75% of the major towns in Vietnam within a very short space of time. As well as this, 6 suicide NLF members captured the United States Embassy for six hours. The American government now realised that this was a War that they could not win. The footage was also sent back to the U.S where the American people were made aware of the situation in Vietnam. They too now realised that this War was not going to be won and had simply been a waste of money and life. They put more pressure on the government, who knew that they had to do what the people wanted; so they decided to start peace talks. America had lost a War to a country far inferior in an arms sense, mostly due to complacency. ...read more.