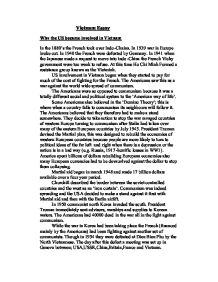 Why the US became involved in Vietnam

Vietnam Essay Why the US became involved in Vietnam In the 1880's the French took over Indo-Chaina. In 1939 war in Europe broke out. In 1940 the French were defeated by Germany. In 1941 when the Japanese made a request to move into indo-China the French Vichy government were too weak to refuse. At this time Ho Chi Minh Formed a resistance group known as the Vietminh. US involvement in Vietnam began when they started to pay for much of the cost of fighting for the French. The Americans saw this as a war against the world wide spread of communism. The Americans were so opposed to communism because it was a totally different social and political system to the 'American way of life'. Some Americans also believed in the 'Domino Theory'; this is where when a country falls to communism its neighbours will follow it. The Americans believed that they therefore had to make a stand somewhere. They decide to take action to stop the war ravaged countries of western Europe turning to communism after Stalin had taken over many of the eastern European countries by July 1945. President Truman devised the Martial plan, this was designed to rebuild the economies of western European countries because people are more likely to turn to political ideas of the far left and right when there is a depression or the nation is in a bad way (e.g. ...read more.

In response to NFL popularity in the south and the fact that the peasants were passing tactical information about the ARVN to the Vietcong Diem's 'Strategic hamlet' programme was put into action. This entailed moving whole villages kilometres from there homes away from areas where there was strong NFL support. They were re-housed in new areas and 'protected' from the Vietcong by south Vietnamese troops. Diem made himself even more unpopular by charging the Vietnamese families who had been moved for the materials to rebuild there homes and even the barbed wire which was there to protect them evenvough these materials had been provided by the Americans for free. The strategic hamlet programme was unsuccessful as the camps were heavily infiltrated by the Vietcong so therefore it had failed to stop the Vietcong getting to the ordinary peasants. When it became clear that Diem wasn't going to hold any elections and the fact that he was very unpopular made people feel the need to fight for elections. A lot of people turned towards Ho Chi Minh and the NFL. The Vietcongs numbers increased rapidly from 2000 in 1957 to 20000 in 1961 to 100000 in 1964, the situation was urgent. But kennedy had other communist threats to worry about other than the North Vietnamese. Cuba was an island just off the coast of Florida, The USSR had put missiles on Cuba after a failed invasion by 1400 Cuban exiles armed with American weapons. ...read more.

Johnson knew there was no second attack "Hell, those dumb, stupid sailors they were just shooting at flying fish?" he told an official days later. Although he knew of this fact there were elections in November and one of his Republican opponents had accused him of being soft on Vietnam. So he used the incident as an excuse to order attacks on 25 North Vietnamese torpedo boat bases. Also congress believed that the second attack had occurred and that the North should suffer the cosequences. On the sixth of August president Johnson proposed the gulf of Tonkin resolution to congress. This gave the president power to escalate American military involvment on the south. But Johnson did not want to do this as his advisors believed that further airstrikes would be sufficient for victory. It soon became obvious that the Vietcong were not goig to be defeated by just the South Vietnamese army. December 1964, 700 elite South Vietnamese troops were killed, wounded or captured this was the best the south had to offer. The NFL also attacked USAAF bases. February 1965, 10 USAAF helicopters destroyed, 8 servicemen killed and 100 wounded. February 13th the president approves operation 'rolling thunder'. This meant that north Vietnam would be bombed on a regular basis. In March 3500 US combat troops were sent to Vietnam to protect the air bases. By the end of the year there would be 200,000 US combat troops in Vietnam. The Americans had been well and truly sucked into the 'quagmire'. ...read more.