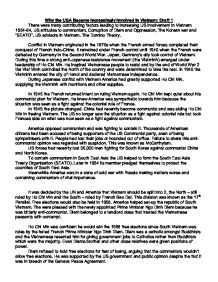 Why the USA Became increasingly involved in Vietnam.

Why the USA Became increasingly involved in Vietnam: Draft 1 There were many contributing factors leading to increasing US involvement in Vietnam 1954-64, US attitudes to communism, Corruption of Diem and Oppression, The Korean war and "SEATO", US advisors in Vietnam, The Domino Theory. Conflict in Vietnam originated in the 1870s when the French armed forces completed their conquest of French Indo-China. It remained under French control until 1940 when the French were defeated by Germany in the Second World War. Japan, Germany's ally took control of Vietnam. During this time a strong anti-Japanese resistance movement (the Vietminh) emerged under leadership of Ho Chi Min. He inspired Vietnamese people to resist and by the end of World War 2 the Viet Minh controlled the North of the country and were determined to take the rest. In 1945 the Vietminh entered the city of Hanoi and declared Vietnamese independence. During Japanese conflict with Vietnam America had greatly supported Ho Chi Min, supplying the Vietminh with munitions and other supplies. In 1945 the French returned intent on ruling Vietnam again. Ho Chi Min kept quiet about his communist plan for Vietnam. He knew America was sympathetic towards him because the situation was seen as a fight against the colonial rule of France. ...read more.

Diem refused to hold free elections for fear of losing, arguing that the communists wouldn't allow free elections. He was supported by the US government and public opinion despite the fact it was in breech of the Geneva Peace Agreement. The situation seemed clear to the American people, bad guys in the north, good in the south. They dogmatically assumed the same to be true of North and South Vietnam. US advisors were sent to South Vietnam to make sure that the country stayed pro western and anti-communist. The US poured in economic aid and modern weapons. The program was set-up in 1954 when President Eisenhower sent 17 advisers with sealed orders to Saigon. By the time Eisenhower left office in 1961 there were 685 advisers. They were there to train the Army of the Republic of Vietnam in using modern weapons to combat and expected invasion from the North. US involvement in Vietnam was largely at the insistence of Eisenhower's Secretary of State John Dulles. He argued that the pro-western governments of other Asian countries would fall like dominoes each one pushing over its neighbor if any one of them was toppled. Most Americans agreed with him. This became known as the Domino Theory. ...read more.

At first he continued with 3) but after deciding that it was "the biggest god damn mess" he ever saw he decided the only way out was to go all out for victory. He persuaded congress to pass the Gulf of Tongking resolution granting him permission to retaliate if any ships there were attacked. Justification for him attacking Vietnam came on the 6th-7th of February 1965 when the Vietcong attacked a US airbase in Pleiku. Over 100 people were killed including 8 US advisers and 10 planes were lost too. The American people were outraged and so Operation Rolling thunder (an all out offensive bombing campaign) began on the 11th of February 1965. This was accompanied by the marines being sent and General Westmooreland (an American) gaining control of the war. The main reason for increasing US support in Vietnam was its fear of communism and its spread. This fear compelled the US to give aid to France and the Domino theory meant America wouldn't pull out later on and risk the collapse of all of eastern Europe to communism. The success of the Vietcong and the corruption of Diem and South East Asia lead to increasing commitment in the form of advisors. It was Johnson that believed direct involvement was the only way to get America out, however their lack of success meant that pride became a key reason for the US remaining in Vietnam until 1975. ...read more.