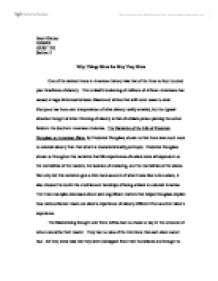 Why Things Were the Way They Were.

Mark Klinker 10/06/04 GHIST 225 Section 3 Why Things Were the Way They Were One of the darkest times in American history was that of the three to four hundred year timeframe of slavery. This unlawful enslaving of millions of African Americans has caused a tragic bitterness between blacks and whites that will never cease to exist. Everyone has there own interpretation of what slavery really entailed, but the typical situation thought of when thinking of slavery is that of a black person picking the cotton fields in the Southern American Colonies. The Narrative of the Life of Frederick Douglass, an American Slave, by Frederick Douglass, shows us that there was much more to colonial slavery than that which is characteristically portrayed. Frederick Douglass shows us throughout his narrative that life experiences of a slave were all dependent on the mentalities of the masters, the location of enslaving, and the mentalities of the slaves. Not only did this narrative give a first-hand account of what it was like to be a slave, it also showed the world the cruelties and hardships of being a black in colonial America. The three examples discussed above were significant matters that helped Douglass explain how various factors made one slave's experience of slavery different from another slave's experience. ...read more.

Learning would spoil the best nigger in this world...if you teach a nigger how to read, there would be no keeping him. It would forever unfit him to be a slave. He would at once become unmanageable, and of no value to his master. As to himself, it could do him no good, but a great deal of harm. It would make him discontented and unhappy.'(78) This owner's mentality sparked a fire inside of Douglass's heart. What the master dreaded the most was what Douglass most desired. "From that moment on Douglass understood the pathway from slavery to freedom" (78). Though he hated being a slave, the mentalities of his owners made slavery manageable some of the time and from that point forward planned on learning to read and write and eventually escape to the north. Douglass, through the experience of the city, now realized that life of a city slave was completely different than the life of a country slave. While growing up in the country, Douglass was given one shirt, a pair of pants, and a blanket to share. Food rations were given out once a month and split up between all the other slaves. He lived a life that no human being deserved to live. ...read more.

He showed us the hardships, the cruelty, and kindness that was involved throughout slavery in colonial America. His personal accounts of slavery showed to us why things were the way they were. Not only did Fredrick Douglas show us what was bad about slavery, he also showed us what was good. He showed to us that not all slave owners were cruel heartless people like those portrayed in movies and books. In the end, he proved to us that a slaves experience was based mainly on their personal mentality toward it. A slaves' mentality towards a situation would either make them or break them. In the situation with Demby, his mentality was that he was not going to deal with being beaten and tortured any more. The result of this mentality was death. Frederick Douglass on the other hand had a positive mentality toward slavery and dealt with it as long as he could until he was able to escape to freedom. A slaves experience and hardships were placed strictly on their own shoulders regardless of whether they were a slave in the city or in the country, and regardless of whether your owner was abusive or kind. Slaves had the opportunity to deal with the life they had been given and make the best out of it, or do what many slaves like Douglass did and escape to the north to pursue their desire of freedom. ...read more.