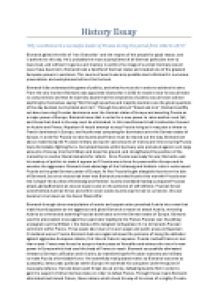 Why was Bismarck a successful leader of Prussia during the period from 1862 to 1871?

﻿History Essay ________________ ?Why was Bismarck a successful leader of Prussia during the period from 1862 to 1871?? Bismarck gained the title of ?Iron Chancellor? and the respect of the people for good reason, and is admired to this day. He is probably the most accomplished of all German politicians ever to have lived, and without his genius and mastery in politics the image of a united Germany would never have been born. Bismarck took a handful of German states and created one of the greatest European powers in existence. This course of events was only possible due to Bismarck?s numerous provocations and well-planned actions that he took. Bismarck fully understood the game of politics, and what he must do in order to achieve his aims. From the very moment Bismarck was appointed Chancellor in 1862 he made it clear he would make no compromises and that he was fully aware that the simplicities of politics would never achieve anything by themselves saying ?Not through speeches and majority decisions are the great questions of the day decided, but by blood and iron?. ...read more.

Prussian forces overwhelmed Austrian forces and within seven weeks Austria was forced to surrender, this war became to be known as the Seven Weeks War. Bismarck through clever manipulation of events and opportunism provoked Austria into a war that made Austria appears as the aggressor and gives Bismarck a reason to attack Austria, removing Austria as a threat and asserting Prussian dominance over the German states of Europe. Bismarck used his provocation once again four years later leading to the Franco-Prussian war. By editing a telegram sent by William I, the famous Ems telegram to Napoleon III, he stirred anti-Prussian sentiment within France. Three weeks later due to his own anger and public pressure Napoleon III declared war on Prussia. Bismarck had once again achieved the pretence of being the defender against aggressive European nations, this time at France?s expense. Prussia crushed France in less than a year. France was forced to accept a harsh peace at Versailles and witness the rise of a new power in Europe which had used the body of France to reach. ...read more.

Bismarck was an extremely successful leader of Prussia from the moment he came into office in 1862-1871. He transformed Prussia into a formidable fighting force and ensured the necessary army reforms took place, fighting off liberal protests. He successfully manipulated European relations and the European situation, through which he managed to divide and conquer. He isolated France and Austria and meticulously defeated them one by one removing any opposition to unification, all the while making them seem as the aggressors and himself and Prussia as defenders of peace. He gained the support of the German states and appeared as the protector of their rights. Bismarck achieved the title of ?The Iron Chancellor? for good reason; he achieved what many had failed to do all through his policy of ?blood and iron? and with little or no compromise. He won the game of wits and politics and changed its very rules, achieving success without bending to stresses and gaining without losing. He succeeded on the battle field and off it, and gave rise to one of the greatest powers Europe has ever known. ...read more.