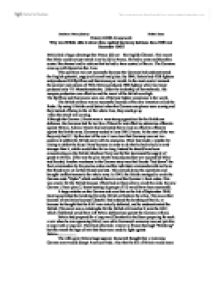 Why was Britain able to stand alone against Germany between June 1940 and December 1941?

Dessislava Valeva (Jessica) Fields's House History-GCSE-Coursework Why was Britain able to stand alone against Germany between June 1940 and December 1941? Britain had a huge advantage that France did not - the English Channel. This meant that Hitler could not just march in as he did in France. He had to cross and therefore control the channel and to achieve that he had to have control of the air. The Germans came up with Operation Sea Lion. This operation was not successful because the Germans had underestimated the English potential, supply of aircraft and pilots. By 1940, Britain had 4238 fighters and produced 450 Spitfires and Hurricanes per month. In the most crucial moment: the summer and autumn of 1940, Britain produced 1900 fighters while Germany produced only 775 Messchorschmitts. Under the leadership of Beaverbrook, the weapon production was effective and the moral of the British was high. The Spitfires and Hurricanes were one of the best fighter aeroplanes in the world. ...read more.

This was crucial for the British because if they had not been able to crack the code, the new German U-boat plan (U-boats hunting in groups of 15) would have been successful. A huge mistake on the German side was that on the 3rd of September 1940, Goering switched the bombing from the British airfields to the cities. This was either because of retaliation because Churchill had ordered the bombing of Berlin, or because he thought that the RAF was virtually defeated, and he underestimated the British. This move was a catastrophe for the British civilians but it save the RAF, which if defeated would have left Britain defenceless against the German airforce. Britain had prepared for a long war (Chamberlain had been preparing for such a war when he was appeasing Hitler) was while Germany's economy was not yet able to cope with a long war. They had achieved a victory in France thorough "Blitzkrieg" but this wasn't the type of war that they were made to fight against Britain..................... ...read more.

Hitler had been planning to take over Russia. Therefore he never completely concentrated on Britain. If he had turned his whole attention on to Britain at the time, it is most likely that he would have defeated her. It was a fact that Germany did not have the economic of military power to fight a war in two fronts. In fact Hitler offered many opportunities to Britain not to involve herself in the war but Churchill did would not agree. Hitler wanted Britain to hold on to her empire because he believed that if she was defeated, the Americans and the Russians would become even stronger. In December 1940, Hitler told his Generals that Russia is Germany's main objective. He thought he could postpone or 'on hold' the complete invasion of Britain. He believed that when Russia was defeated, Germany would have sufficient resources and power to defeat Britain. As he turned his attention on Russia, he made the biggest mistake in the war because he simply could not fight a war on two fronts. ...read more.