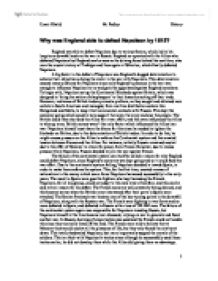 Why was England able to defeat Napoleon by 1815?

Why was England able to defeat Napoleon by 1815? England was able to defeat Napoleon due to various factors, which led to his long-term downfall such as the war in Russia. England co-operated with the Allies who defeated Napoleon but England can be seen as the driving force behind the coalition, who won the crucial victory at Trafalgar and then again at Waterloo, which finally defeated Napoleon. A big factor in the defeat of Napoleon was England's dogged determination to achieve their objective as being the victor in the war with Napoleon. This determination caused many problems for Napoleon since only England's presence in the war was enough to influence Napoleon to try and gain the upperhand against England somehow. To begin with, Napoleon set up the Continental Blockade against Britain, which was designed to 'bring the nation of shopkeepers' to their knees by cutting off their trade. However, resilience of British traders proved a problem, as they sought and obtained new outlets in South American and managed, from wartime distribution centers like Heligoland and Malta, to keep illicit commercial contacts with Prussia. ...read more.

The French economy was constantly being drained, and this became worse when the British army intervened after their ports in Spain were attacked. The Iberian Peninsula war became one of the key turning points in the downfall of Napoleon, along with the Russian war. The French were fighting in two fronts and so were defeated in Spain, and defeated in Russia with a loss of 700 000 men. The failure of the continental system again was responsible for Napoleon invading Russia, but Napoleon himself at the time became war obsessed, relying on war to generate and fund another war. In Russia, burning of crops tactics was used and the French could not handle this since they normally lived off the land. The French were told to believe that at Moscow they would receive all the pleasures of life, but they only found the city burnt down. This totally bedazzled Napoleon, but more importantly sapped the morale of the soldiers. This is a fault with Napoleon's tactics since although he successfully used these tactics earlier; he did not develop them while the Allies did giving them an advantage. ...read more.

Napoleon, who was off the battlefield, had left Ney in charge and he ordered the French to charge. If Napoleon had been there, it might have been a different story but he wasn't and so the end result was that the French was met by British soldiers arranged in squares who fired in all directions in all directions. They were slaughtered. This bad leadership by Ney did not just show once. He even ordered the cavalry to charge at the British without any infantry support and the French lost even more men and morale. Leipzig may have caused Napoleon to abdicate, but Waterloo caused him to be defeated forever. The British played an important part in the defeat of Napoleon since they provided the backbone to any French opposition, and to the Allies who defeated Napoleon at Leipzig. The Battle of Waterloo shows the hatred between Britain and France since they fought passionately, but ultimately the British influence on the Allies and the actions of Napoleon which influenced the Allies too, caused the Prussians to arrive and signal the end for Napoleon. Umair Khalid Mr Pedley History 1 ...read more.