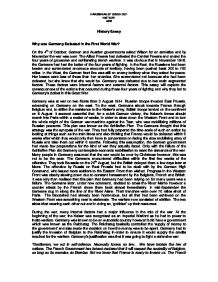 Why was Germany Defeated in the First World War?

History Essay Why was Germany Defeated in the First World War? On the 4th of October, German and Austrian governments asked Wilson for an armistice and by November the war was over. The Allied Powers had defeated the Central Powers and ended the four years of gruesome and exhilarating trench warfare. It was obvious that in November 1918, the Germans had had the better of the four years of fighting. In the East, the Russians had been beaten and surrendered enormous amounts of territory, having been pushed back 200 to 700 miles. In the West, the German front line was still on enemy territory when they asked for peace. Her losses were less of those than her enemies. She surrendered not because she had been defeated, but she knew that she would be. Germany was defeated due to two main segmented factors. These factors were internal factors and external factors. This essay will explore the consequences of the actions that occurred during these four years of fighting and why they led to Germany's defeat in this Great War. Germany was at war on two fronts from 3 August 1914. Russian troops invaded East Prussia, advancing on Germany on the east. To the west, Germans struck towards France through Belgium and, to stiffen the resistance to the Kaiser's army, British troops landed on the continent on 8 August. It seemed essential that, for a quick German victory, the Kaiser's forces should march into Paris within a matter of weeks, in order to close down the Western Front and to turn the whole might of the German war-machine against the Tsar, who was moblilising millions of Russian peasants. ...read more.

The main reason was due to the fact of the Germans having open naval warfare on any ship that came within a certain distance of Britain and also the Zimmerman Telegram, which will be discussed later in the essay. The military dictators ordered this type of submarine warfare, however they had not contemplated the true damage it could do to them. This further aroused more changes of political opinion. Morale hit 'rock bottom' for many Germans, as they knew that they could not possibly face another million or so men. American soldiers were young, better prepared and they more than tipped the balance towards the Allies after the defeat of Russia. They had vast amounts of resources and technology which surely could not be matched. At that time, it had immensely improved its economy as it could start trading with the Latin American countries as the European countries were pre-occupied with the war. Martial law was the new German policy regulated by the chief military dictators. Morale continued to surge down and opinions went against the war even more when a new bill had been passed which allowed any person within the age of 16-60 to be conscripted or help in farming and other primary work. After the USA had entered the war, the Kaiser was quick to deliver a speech saying that it was now the best time for Germans to stick together. He hoped, even after the anticipated defeat, Germany would remain autocratic and allow him to continue as Kaiser, during which, many opposition parties, such as the SPD, continued to distribute propaganda pamphlets against the war and the German autocracy. ...read more.

Several million men were gathered from the colonies. During the war, Britain had control over India, which was know as the British Raj. India was the jewel in Britain's empire. Along with its riches, it consisted of many brave soldiers such as the Sikhs. Over 200,000 Sikhs fought for the British in the First World War, of which, 90,000 turbaned Sikhs died fighting their cause. . These were highly significant factors however, the most significant factor, which was the main cause of the defeat of Germany, was when USA entered the First World War. The declaration of war was slightly delayed at first because USA were afraid a civil war may develop if they took sides in the war, as many of the Americans were European immigrants. However, the unrestricted submarine warfare implemented by Germany agitated the Americans severely. It restricted the amount of supplies that could enter Britain and also lost many American lives. This along with the Zimmerman Telegram resulted in the entering the war. Artur Zimmerman had sent a telegram to the German Minister in Mexico, urging him to pursue an alliance with the Mexicans. The British intercepted this telegram and quickly made its contents known in Washington. The Americans were severely infuriated and declared war on the Germans. They believed it was 'to make the world safe for democracy'. America began mobilising and sending 300,000 men per month. An estimated 5 million landed on the European continent. America had a great economic contribution with large supplies. Germany, knowing that defeat was around the corner, launched an offensive. When failed, they had nothing but to prevent the 'fatherland' being invaded, therefore asked Wilson for an armistice. The war was over, Germany had been defeated. HARSIMRANJIT SINGH DS1 HISTORY ABB ...read more.