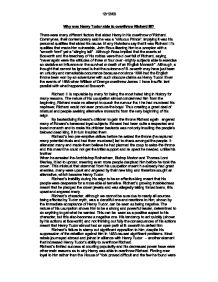 Why was Henry Tudor able to overthrow Richard III?

Why was Henry Tudor able to overthrow Richard III? There were many different factors that aided Henry in his overthrow of Richard. Commynes, their contemporary said he was a "virtuous Prince", implying it was his personal qualities that aided his cause. Many historians say that it was Richard III's qualities that made him vulnerable, John Rous likening him to a scorpion with a "smooth front" yet a "stinging tail". Although Ross implied that the events at Bosworth and the treachery of his nobles were the downfall of Richard, saying, "never again were the attitudes of three or four over-mighty subjects able to exercise so decisive an influence on the survival or death of an English Monarch". Although, a thought that cannot be ignored is that the outcome of Bosworth may have just been an unlucky and remarkable occurrence because not since 1066 had the English throne been won by an adventurer with such obscure claims as Henry Tudor. Even the events of 1688 when William of Orange overthrew James II have insufficient parallel with what happened at Bosworth. Richard III is reputable by many for being the most hated king in history for many reasons. The nature of his usurpation almost condemned him from the beginning, Richard made no attempt to quash the rumour that he had murdered his nephews; Richard would not even produce the boys! ...read more.

This treachery at Bosworth again gave Henry greater advantage and although many say Richard was a courageous leader in battle, he failed to bring around all the "super magnates" during his reign. Richard's fate depended on his greatest magnates, aristocratic power and this was concentrated on three people and only one of these magnates was loyal, John Howard, Duke of Norfolk. Richard was unable to keep Lord Stanley and the Stanley's unreliability was compounded by the fact he was married to Henry Tudor's mother. Northumberland was angered by Richard's instatement of his nephew as leader of the "Council of the North" and therefore did not stay loyal to Richard. This failure meant Henry Tudor had even more advantage over him. Events at Bosworth underlined Richard's tendency to act quickly without fully thinking out the consequences because he put everything on the outcome of one battle. The treachery in Richard's ranks (caused by his inability to keep all of his nobles happy) meant that although Richard's army outnumbered Tudor's he was let down by Northumberland's inability to engage his force, which was large and well equipped. The lack of support at his critical hour reflected Richard's mismanagement of patronage earlier in his reign. The vanguard success of the earl of Oxford against the loyal duke of Norfolk meant Henry Tudor had an advantage and the Stanley's who were renowned for their tendency to change sides at the last moment were also the cause of Richard's downfall and Henry's ascension. ...read more.

These informants meant that Henry could be one step ahead of his opposition. As Henry lived in France and had done so since 1471 no one knew anything about him, he had no bad reputation like Richard and no apparent baggage from his past, unlike Richard. This freedom he gained from being abroad meant that he could act to gain support and plan campaigns. The only other alternative that had claim was male (although of female descent) and of age was John, the earl of Lincoln. However, John of Lincoln was loyal to Richard, and therefore was not a very good alternative to the King they despised. Henry, in the eyes of the subjects of Richard was perfect, he had claim through the line of John of Gaunt and had Lancastrian credentials. The Lancastrians were the enemies of the Yorkists and therefore, he the ideal alternative. Although there were many different reasons for Henry Tudor's support during Richard's reign and after his death, the main reasons were Richard III himself and Henry Tudor's attractiveness in comparison. All of the aspects of Henry's support - his personal qualities, the support of Henry by the French and attitude of the French government towards Richard and the events at Bosworth were all for the same underlying issue, they all wanted Richard off the throne and Henry was their only alternative. Rous concluded that "Although Richard III's days were short, they were ended with no lamentation from his groaning subjects." 12/12/03 ...read more.