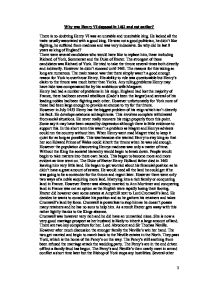 Why was Henry VI deposed in 1461 and not earlier?

Why was Henry VI deposed in 1461 and not earlier? There is no doubting Henry VI was an unstable and unsuitable king. He lacked all the traits usually associated with a good king. He was not a good politician, he didn't like fighting, he suffered from madness and was very indecisive. So why did he last 8 years as king of England? There were several candidates who would have like to replace him, these including Richard of York, Sommerset and the Duke of Exeter. The strongest of these candidates was Richard of York. He tried to take the throne several times both directly and indirectly. However he didn't succeed until 1461. The reasons for this taking so long are numerous. The main reason was that there simply wasn't a good enough reason for York to overthrow Henry. His ability to rule was questionable but Henry's claim to the throne was much better than Yorks. Any ruling problems Henry may have hide was compensated for by his ambitious wife Margaret. Henry had had a number of problems in his reign. ...read more.

However Exeter was already married to Ann Mortimer and conquering land in France was not an option as the English were rapidly losing their footing. Exeter did however own some estates at Ampthill next to Lord Cromwell's land. He decides he wants to consolidate his position and so he gathers his retainers and takes Cromwell's land by force. Cromwell is powerless to stop him as he doesn't posses many retainers and he has no sons to help him. As a result Exeter gets away with this rather lightly thanks to the Kings absence. Cromwell was however very rich and he did have an unmarried niece. She is now a very good marriage prospect as her husband is likely to inherit a large amount of land. There are two key competitors for her. Lord Abromont and Sir Thomas Neville. However after much discussion the stronger family the Neville's win her hand. The two get married and begin to march back to the Neville estates in the North. They pass York, which is the home of the Percy's on the way. ...read more.

Consequently, upon Henry's recovery, in December 1454, Margaret persuaded him to dismiss York and restore Somerset to power. York immediately took up arms. At St. Albans, Hertfordshire, on May 22 1455 his forces killed Somerset in battle and he had control of the government until Margaret again gained the upper hand in October 1456. Hostilities between the two sides reopened late in 1459; in July 1460 York's able lieutenant Richard Neville, earl of Warwick, defeated the Lancastrians at Northampton and captured the King. A compromise was then worked out whereby Henry was to remain king for life and York was to succeed him. This was effectively the end of Henry VI reign. I think considering the circumstances Henry was lucky to stay King as long as he did. If he had gone mad earlier, hadn't had Magrets support or made a larger mistake then I think he would have undoubtedly lost his throne much earlier. A combination of factors led to his downfall. The loss of France, his poor ability to rule, madness and strong opposition led to his eventual downfall. 1 ...read more.