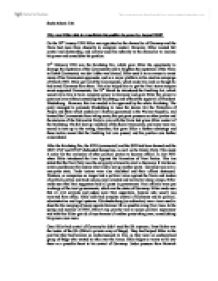 Why was Hitler able to consolidate his position in power by August 1934?

Why was Hitler able to consolidate his position in power by August 1934? On the 30th January 1933 Hitler was appointed as the chancellor of Germany and the Nazis had risen from obscurity to complete control. However, Hitler wanted full control and dictatorship, and actively used his authority as the chancellor to increase his power and consolidate his position. 27th February 1933 saw the Reichstag fire, which gave Hitler the opportunity to damage the reputation of the Communists and to heighten the reputation of the Nazis as Dutch Communist, van der Lubbe was blamed. Hitler used it as an excuse to arrest many of his Communist opponents, and as a major platform in his election campaign of March 1933. Hitler got rid of the Communists, which made him look as though he had saved Germany from them. This also helped him to get the Nazi storm troopers arrest suspected Communists. On 23rd March he introduced the Enabling Act, which would allow him to have complete power in Germany and gave Hitler the power to pass any laws without consulting the Reichstag, and without the approval of President Hindenburg. ...read more.

This law stated that the Nazi Party was the only party allowed to exist in Germany. It laid down severe punishment for anyone who tried to set up another party. Germany was now a one-party state. Trade unions were also abolished and their offices destroyed. Workers, or companies no longer had a political voice against the Nazis and leaders of political parties and trade unions were arrested and moved to labour camps. Hitler made sure that Nazi supporters held all posts in government. Nazi officials were put in charge of the local governments, which ran the states of Germany. Hitler made sure that all civil servants and judges were Nazi supporters. Anyone who wasn't was removed from office. Hitler soon had complete control of Germany and its political, administrative and legal systems. Gleichschaltung (co-ordination) was a term used to describe the merging of many aspects German life as possible along Nazi lines. In the spring and summer of 1933, Hitler's top priority was to secure political supremacy and with this Hitler got rid of any chances of another party taking over, consolidating his power even more. ...read more.

Hitler secured the control of the Nazi party and his position as Dictator of Germany. They were rounded up and shot. Hitler told the Reichstag that he had done all this to "save the nation" from threat. The idea of Gleichschaltung was, to some extent, generated by the power and freedom exploited by the SA. The only person with higher power than Hitler was the President, Hindenburg. On 2nd August 1934, Hindenburg died aged 87. Immediately Hitler declared that he was President, as well as being Chancellor and Head of the German army. These positions meant that Hitler could now give himself the title of "Fuhrer". The Nazi control of Germany was now totally complete. All officers of the army were called on to take a personal oath of loyalty to the Fuhrer, which was critical in securing the dictatorship as it made opposition to him less likely. One method or another had removed all areas of opposition, and because of these methods, Hitler was able to consolidate his position in power by August 1934. ...read more.