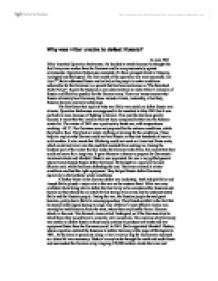 Why Was Hitler Unable To Defeat Russia?

Why was Hitler unable to defeat Russia? In June 1941 Hitler launched Operation Barbarossa. He decided to attack because he thought the Red Army was weaker than the Germans and he was passionately against communists. Operation Barbarossa consisted of a three pronged attack to Moscow, Leningrad and Stalingrad. The first month of the operation was very successful. On July 3rd Stalin addressed Russia and called on his people to make conditions unbearable for the Germans in a speech that has become known as "The Scorched Earth Policy". It gave the Russians a new determination to make Hitler's invasion of Russia as difficult as possible for the German army. There are many reasons why Russia ultimately beat Germany; these include climate, leadership, allied help, Russian heroism and new technology. The first factor that explains why was Hitler was unable to defeat Russia was climate. Operation Barbarossa was supposed to be launched in May 1941 but it was put back to June, because of fighting in Greece. This cost the Germans greatly because it meant that the invasion had not been completed by the time the Russian winter hit. The winter of 1941 was a particularly harsh one, with temperatures reaching -40 (C. The Germans were not prepared for the extreme conditions, which they had to face. ...read more.

Zhukov's army broke through the north and south fronts and surrounded the German army, trapping 278,000 soldiers inside the town and causing them to surrender. This helps to explain why Russia defeated Germany as it boosted the morale as the first time a Germany army had been defeat and it also effected the Germans as the public started to question whether they were actually a master race. The defeat at Stalingrad is sometimes considered the end for the Nazis, so this is another reason why Stalin's leadership helped the Russians defeat the Germans A further factor in the Russian defeat of Germany was the heroism of the Russian people. On 3rd July, Stalin called on his people to flee their towns and destroy anything that could be of use to the advancing Germans. This involved digging tank traps, burning their properties and killing animals that the Germans could eat. This had a huge effect on the Germans as during the winter they could not find shelter as it had been burned by the Russians. A further reason for this Russian heroism was the Germans atrocities, when they occupied a town they brutally massacred anyone they could find. This gave the Russians an incentive to follow Stalin's instructions. ...read more.

New technology helped Russia defeat Germany as the T34 played a vital part in Russia's victory at Kursk in July 1943. The Germans launched an attack on the Russians, but the Russians defended with 850 tanks. The battle lasted a full week and the Germans lost so many men and tanks that they never launched an offensive attack again. This meant that the Russians could begin push the Germans back and launch offensive attacks on them. In May 1945 the Red Army reached Berlin and ended the war. There were important factors in the Russian defeat of Russia. Allied help played a big part, especially at the end of the war, when they landed France and forced Germany to fight on two fronts. However, I think the most important factor in Russia's defeat of Germany was the heroism of the Russian people. As they continued to work in factories and produce tanks and weapons, the Red Army had a constant flow of new equipment. The Russians also destroyed their homes, crops and farm animals so that the German army could not take them. I think this takes tremendous courage as, in many cases, they were destroying their livelihood. Russian endurance was also an important factor especially during the siege of Leningrad, which lasted 900 days without the Russians surrendering. I think that without the Russian heroism they would not have won the war as it played such a vital part in many different ways. ...read more.