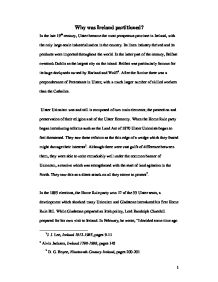 Why was Ireland Partitioned

Why was Ireland partitioned? In the late 19th century, Ulster became the most prosperous province in Ireland, with the only large-scale industrialization in the country. Its linen industry thrived and its products were imported throughout the world. In the latter part of the century, Belfast overtook Dublin as the largest city on the island. Belfast was particularly famous for its huge dockyards owned by Harland and Wolff1. After the famine there was a preponderance of Protestants in Ulster, with a much larger number of skilled workers than the Catholics. Ulster Unionism was and still is composed of two main elements; the protection and preservation of their religion and of the Ulster Economy. When the Home Rule party began introducing reforms such as the Land Act of 1870 Ulster Unionists began to feel threatened. They saw these reforms as the thin edge of a wedge which they feared might damage their interests2. Although there were vast gulfs of difference between them, they were able to unite remarkably well under the common banner of Unionism, a resolve which was strengthened with the start of land agitation in the North. They saw this as a direct attack on all they strove to protect3. In the 1885 elections, the Home Rule party won 17 of the 33 Ulster seats, a development which shocked many Unionism and Gladstone introduced his first Home Rule Bill. ...read more.

Bonar Law stated that this should be permanent and Carson also refused to compromise. In July 1914 King George, recognising the looming crisis called the Buckingham Palace conference in an effort to make some progress. This conference was attended by Asquith, Lloyd George, Bonar Law, Carson, Craig, Redmond and Dillon11. At the conference Carson immediately stated that he would not consider anything other than partition. The question was the area for exclusion and the time for which it would be excluded. Redmond suggested that each county could be given a plebiscite whether to opt in or out of Home Rule12. Carson disagreed and said Ulster should vote as a block. This was unacceptable to Redmond. Neither side would concede the counties of Tyrone and Fermanagh. It was here that the conference broke down. The original intention of the Unionists was to defeat Home Rule for all Ireland. However, as time went on the idea of partition began to appeal more and more to them13. They began to see the safety from interference it would give them. What had began as a device for killing home rule had become an end in itself. The implementation of Home Rule had to be delayed for the duration of the Great War. ...read more.