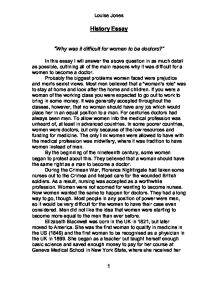 History Essay "Why was it difficult for women to be doctors?" In this essay I will answer the above question in as much detail as possible, outlining all of the main reasons why it was difficult for a women to become a doctor. Probably the biggest problems women faced were prejudice and men's sexist views. Most men believed that a "woman's role" was to stay at home and look after the home and children. If you were a woman of the working class you were expected to go out to work to bring in some money. It was generally accepted throughout the classes, however, that no woman should have any job which would place her in an equal position to a man. For centuries doctors had always been men. To allow women into the medical profession was unheard of, at least in advanced countries. In some poorer countries, women were doctors, but only because of the low resources and funding for medicine. The only link women were allowed to have with the medical profession was midwifery, where it was tradition to have women instead of men. ...read more.

In 1853, along with her sister, she co-founded a private clinic in New York City. This clinic was the first to have an entirely female staff. She became the first woman to appear on the Medical Register. She was one of the founders of the National Health Society of London and the London School of Medicine for Women, where she was a professor of gynaecology between 1875 and 1907. The first English woman to qualify in medicine and become a member of the British Medical Association was Elizabeth Garrett Anderson. She first resolved to study medicine when in 1859, at the age of 24, she attended some lectures given by Elizabeth Blackwell. With the help of a personal tutor and the support of her father, Elizabeth studied mathematics and science. She then became a surgical nurse at Middlesex Hospital in London, where she trained informally by following doctors on their hospital rounds. However, she was unable to attend lectures and had to study privately. In 1858 law regulated medical qualifications in Britain. Every new doctor had to be accepted as a member of the College of Physicians, the College of Surgeons or the Society of Apothecaries. ...read more.

After retiring in 1902, Elizabeth became the first woman mayor in England. Naturally, she supported the suffragette movement for women to have equal rights. She died in 1917, aged 81. Girl's education started improving from the 1870s. Several universities were beginning to admit women. In 1874, six women, led by Sophia Jex-Blake, completed a full medical course at Edinburgh. Afterwards, the University immediately announced that it was only permitted to grant medical degrees to men. Sophia and her friends completed their degrees at either Dublin or Zurich, and in 1874 they founded the London School of Medicine for Women. In 1876 Parliament passed an Act that opened all medical qualifications to women. Nowadays, women are regarded as equals to men. They are given the same academic choices as men and it has actually been proven that females perform better academically than males. Equality among the sexes could not have been achieved if it were not for the women mentioned in this essay, and many others. In the early twentieth century, the suffragettes went to great lengths to achieve equality for women. All of these women received setbacks, but they persisted; they never gave up. Thanks to these women, the saying, "it's a man's world", is no longer true. Louise Jones Louise Jones 1 ...read more.