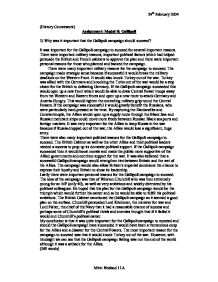 Why was it important that the Gallipoli campaign should succeed?

(History Coursework) Assignment: Model B: Gallipoli 1) Why was it important that the Gallipoli campaign should succeed? It was important for the Gallipoli campaign to succeed for several important reasons. There were important military reasons, important political factors which had helped persuade the British and French cabinets to approve the plan and there were important personal reasons for those who planned and backed the campaign. There were many important military reasons for the campaign to succeed. The campaign made strategic sense because if successful it would break the military deadlock on the Western Front. It would also knock Turkey out of the war. Turkey was allied with the Germans and knocking the Turks out of the war would be a step closer for the British to defeating Germany. If the Gallipoli campaign succeeded this would open up a new front which would be able to draw Central Power troops away from the Western and Eastern fronts and open up a new route to attack Germany and Austria-Hungry. This would tighten the encircling military grip round the Central Powers. If the campaign was successful it would greatly benefit the Russians, who were particularly hard-pressed at the time. ...read more.

They thought of the Gallipoli campaign like this because there were many casualties during the war with no success. There were about 10,000 casualties with around 3000 dead. No land was gained by the time Kitchener called off the campaign. The second cartoon is showing a typical Anzac soldier according to the Australians. They viewed themselves as being shabby, cheerful, irreverent and full of pride. Most Australians are like this however this is a stereotyped view. Many Australians are like this, but not all. Still, Australians thought they were like this and were happy to be seen in this light and before the campaign they were the only people who saw themselves as this, everyone else saw them in an awfully bad light. However Source A does not show the full picture on Australian soldiers during the Gallipoli campaign. When the Anzacs fought in Gallipoli the conditions were appalling but they still dug deep to fight to the death. Everybody realised this and even though the battle was lost and the campaign was an utter failure, the Australians were shown in a new, brighter light by everyone else (the British finally saw the Australians and New Zealanders for who they were.) ...read more.