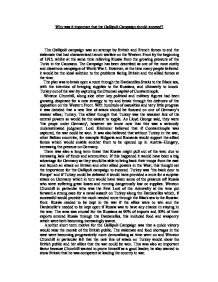 Why was it important that the Gallipoli Campaign should succeed?

Why was it important that the Gallipoli Campaign should succeed? The Gallipoli campaign was an attempt by British and French forces to end the stalemate that had characterised trench warfare on the Western Front by the beginning of 1915, whilst at the same time relieving Russia from the growing pressure of the Turks in the Caucasus. The Campaign has been described as one of the most costly and disastrous campaigns of World War I. However, at the time many people believed it would be the ideal solution to the problems facing Britain and the allied forces at the time. The plan was to break open a route through the Dardanelles Straits to the Black sea, with the intention of bringing supplies to the Russians, and ultimately to knock Turkey out of the war by capturing the Ottoman capital of Constantinople. ...read more.

It was also believed that without Turkey in the war, other Balkan countries, for example Bulgaria and Romania would support the allied forces which would enable another front to be opened up in Austria-Hungary, increasing the pressure on Germany. There was also a long term threat that Russia might pull out of the war; due to increasing lack of funds and ammunition. If this happened it would have been a big advantage for Germany as they would be able to bring back their troops from the east and launch an attack on Britain and other allied powers in the West, this thought set the importance for the Gallipoli campaign to succeed. Turkey was 'the back door to Europe' and if Turkey could be defeated it would have provided a route for a surprise attack on Germany ...read more.

Another short term motive for the Gallipoli Campaign was that a quick victory would raise the morale of the British public. The stalemate and food shortages in the west were becoming progressively more demoralising as time went on and Winston Churchill in particular felt that the new line of attack on Turkey would show the British public and her allies that the war could be won. This was also an important factor because Churchill wanted to prove himself as a good leader; he also wanted to show Britain that he was competent at leading the country in war. In conclusion, the most important reason for the Gallipoli Campaign to succeed was the threat to Russia in the east. Without Russia in the war the allies would face a greater chance of lose in the west as all of the central powers forces could be directed towards Britain and France, with disastrous effects. ...read more.