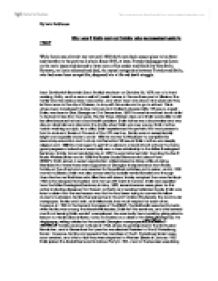 Why was it Stalin and not Trotsky who succeeded Lenin in 1924?

Why was it Stalin and not Trotsky who succeeded Lenin in 1924? While Lenin was alive (at any rate until 1922) both men had a secure place in his favor and therefore in the party as a whole. Since 1917, at least, Trotsky had supported Lenin on the main issues and seemed to have more of his candor and flexibility than Stalin. However, as Lenin sickened and died, the mutual antagonism between Trotsky and Stalin, who had never been compatible, deepened into a life and death struggle. Leon Davidovich Bronstein (Leon Trotsky) was born on October 26, 1879, son of a hard-working, thrifty, and he was a well off Jewish farmer, in the southern part of Ukraine. The family was very serious about education, and when Leon was about nine years old they let him move to the city of Odessa, to stay with his uncle and to go to school. This is where Leon developed his nice manners and intellectual personality. Where as Joseph Stalin, was born in Gori, Georgia on 21st December, 1879. ...read more.

Trotsky then joined Lenin the staff of iskra (The Spark), the Communist newspaper. Trotsky and Lenin, as intellectuals, had much respect for each other; however, in 1903 at the Second Congress of the RSDLP, the Bolsheviks were led by Lenin, while Trotsky was among the Menshevik leaders. Stalin left the seminary, and after several months of leaving Stalin was left unemployed. He eventually found work by giving private lessons to middle class children. Later, he worked as a clerk at the Trifles Observatory. He also began writing articles for the socialist Georgian newspaper, Brdzola Khma Vladimir. Trotsky returned to Russia In 1905, where he participated in the first Russian Revolution, and in December that year he was elected President of the St Petersburg Soviet. However, Trotsky and several other members of the St. Petersburg Soviet were soon arrested, and after a trial they were deported to Western Siberia in January 1907. Stalin joined the Social Democratic Labour Party In 1901, most of the leaders were living in exile, and he stayed in Russia where he helped to organize industrial resistance to Tsarism. ...read more.

Stalin disliked and opposed Trotsky, and in 1927 he was expelled from the Excecutive Committe of Comintern. In 1928 Trotsky was banished to Alma Ata in Kazakhstan, and from there deported to Turkey in 1929. Stalin and Trotsky represented opposite directions for Communism. But while Trotsky used the mighty pen, Stalin implemented communist policies that were exceedingly costly both in lives, and in depriving the Soviet people from freedom. Trotsky used his writings to oppose Stalin, and to establish an alternative direction for communism, and his followers became known as Trotskyists. While Stalin was struggling with practical problems in the Soviet Union, the Trotskyists were fighting for class equality between intellectuals and capitalists. One of Trotsky's loyal sympathizers was Diego Rivera, the famous Mexican muralist, and Trotsky appears, together with Lenin, in two of Diego's murals. The first was the 'Communist Unity Panel' at the New Workers School in New York, and the second the 'Man, Controller of the Universe' mural in Mexico City. August 20th 1940 Leon Trotsky was attacked with an ice-axe in his office in Mexico City by one of Stalin's followers, and the following day Leon Trotsky died. By kate fieldhouse ...read more.