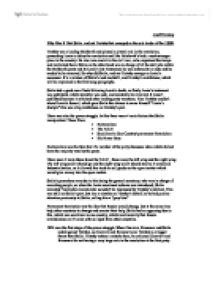 Why Was It That Stalin, and not Trotsky that emerged as the sole leader of the USSR

Josef Fleming Why Was It That Stalin, and not Trotsky that emerged as the sole leader of the USSR Trotsky was a leading Bolshevik and played a pivotal role in the revolution, persuading Lenin to delay the revolution until the Bolshevik's had a much stronger place in the country. He also was crucial to the civil war, as he organised the troops and motivated them. Stalin on the other hand was in charge of all the dull jobs within the Bolshevik party and In Lenin's last Testament, he was referred to as rude and he needed to be removed. So why did Stalin, and not Trotsky emerge as Lenin's successor. ...read more.

There were 2 main Ideas about the N.E.P. , these were the left wing and the right wing. The left wing said it should go and the right wing said it should stay as it would aid Industrialisation, as it allowed free trade to sell goods on the open market which would give money into the open market. Stalin's powerbase was due to him being the general secretary, who was in charge of recruiting people, so when the Lenin enrolment scheme was introduced, Stalin recruited "malleable recruits who wouldn't be impressed by Trotsky's intellect. This was skill on Stalin's part, but also a mistake on Trotsky's behalf, as he had paid no attention previously to Stalin, calling him a "grey blur" Permanent Revolution was the idea that Russia would change, but at the same time help other countries to change and receive their help. ...read more.

After this, Stalin turned on Zinoviev and Kamenev and sided with Bukharin. Here, Stalin unveils his idea of Socialism in one country, this idea gains much support, mainly from all of the recruits that Stalin chose during Lenin enrolment, and here he has turned on his previous allies about the N.E.P. And then Zinoviev and Kamenev teamed up with Trotsky and together they published Lenin's last testament to try and discredit Stalin, however they were expelled from the party for factionalism. And after his three main rivals for power had been expelled, he turned on Bukharin. We notice that all the way through the struggle for power, he has relied on his power base for support. The success of Stalin was due to the fact that he had an incredible amount of luck, and also that all of his opponents seemed to underestimate him. ...read more.