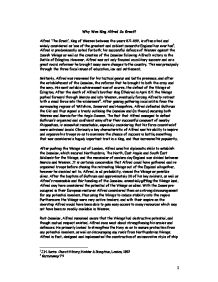 Why Was King Alfred So Great?

Why Was King Alfred So Great? Alfred 'The Great', King of Wessex between the years 871-899, is often cited and widely considered as 'one of the greatest and noblest monarchs England has ever had'1. Alfred is predominantly noted for both; his successful defence of Wessex against the Danish Vikings as well as the creation of the Danelaw following Alfred's victory in the Battle of Edington. However, Alfred was not only focused on military success and as a great social reformer he brought many more changes to the country. This was principally through the three focal issues of education, law and settlement. Militarily, Alfred was renowned for his tactical genius and battle presence, and after the establishment of the Danelaw, the reforms that he brought to both the army and the navy. His most notable achievement was of course, the defeat of the Vikings at Edington. After the death of Alfred's brother King Ethelred in April 871 the Vikings pushed forward through Mercia and into Wessex, eventually forcing Alfred to retreat 'with a small force into the wilderness'2. After gaining gathering local militia from the surrounding regions of Wiltshire, Somerset and Hampshire, Alfred defeated Guthrum the Old and thus signed a treaty outlining the Danelaw and (in theory) securing both Wessex and Mercia for the Anglo-Saxons. The fact that Alfred managed to defeat Guthrum's organised and confident army after their successful conquest of nearby Chippenham, is somewhat remarkable, especially considering that his force consisted of mere untrained locals. ...read more.

For Alfred to successfully organise something so complex with very basic methods of communication and organisation must have taken very delicate planning, implementation and intelligence, another running theme in Alfred's accomplishments. Alfred's military and social policies meet at the construction of buhrs across his Anglo-Saxon Kingdom. The general idea was that all people would be within 24 hours walk from a buhr, a fortified town which would be appropriately equipped to defend itself against Viking raids. As well as being a very intelligent idea that gave Alfred's people better protection that previously. Alfred also financially assisted himself with this idea, by building permanently defended settlements it attracted trade and a small level of urbanisation. As a result of this it simplified the process of taxation, thus allowing Alfred to increase spending and fund his reforms. Additionally the building of the buhrs was a very large operation, it's estimated that erecting the 9000 feet of defensive banks at the buhr in Wallingford would have taken approximately 120,000 man hours. Once again organisational skill would have been key, and Alfred demonstrated this with the quick construction of the buhrs so as to protect his people as rapidly as possible. Arguable his most noteworthy social change was in law. Alfred compiled the 'Doom Book' from three prior Saxon codes, including the Mosaic Codes and Celtic Law. There are two reasons as to why this was such an important occurrence. ...read more.

Alfred also commissioned the 'Anglo-Saxon Chronicle' which is of crucial importance. Historically, it provides us with virtually all information post-Romans and pre-Normans bar Bede's 'Ecclesiastical History of the English People (as translated by Alfred [page II paragraph V]). The chronicle also helped in the formation of an English identity, with the events occurring in relation to the kingdom being recorded in an innovative manner. Alfred certainly gave much to society while taking little, the re-organisation of the army and navy as well as the formation of buhrs illustrates Alfred's ability to manage large projects so as to protect his people. Furthermore his social reforms formed a solid groundwork for the building of an English society, culture and nation. His schools produced highly educated individuals capable of organising the country, translations developed pride, and his chronicle recorded it all for future generations to learn from and observe. Alfred's idea of fairness and justice in the legal system regardless of wealth or power is one that still survives today (in theory) and his intelligence in the devising of the Danelaw was successful in dissuading potential invaders from the continent until many years after his death. Although the single achievements of Alfred may not suffice to call him 'great', a combination of the military and social effects upon his kingdom leading to it's security and rapid cultural development surely results in Alfred 'the Great', being deservedly considered 'Great'. 1 J.H. Kurtz: Church History, Hodder & Stoughton, London, 1892 2 Garmonsway 74 3 The Anglo-Saxon Chronicle 4 The Anglo-Saxon Chronicle 5 Leviticus 19:15 ?? ?? ?? ?? I ...read more.