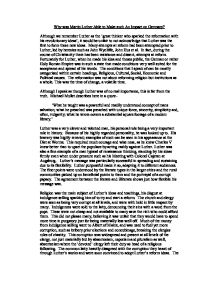 Why was Martin Luther Able to Make such An Impact on Germany?

Why was Martin Luther Able to Make such An Impact on Germany? Although we remember Luther as the 'great thinker who sparked the reformation with his revolutionary ideas', it would be unfair to not acknowledge that Luther was the first to form these new ideas. Many attempts at reform had been attempted prior to Luther, led by heresies such as John Wycliffe, John Hus et al. In fact, during the course of Christianity there has been resistance and dissent, attempts at reform. Fortunately for Luther, when he made his idea and theses public, the German or rather Holy Roman Empire was in such a state that made conditions very well suited for the acceptance and spread of his words. The conditions that I speak of can be mostly categorised within certain headings, Religious, Cultural, Social, Economic and Political causes. The reformation was not about reforming religion but institutions as a whole. This was the time of change, a volatile time. Although I speak as though Luther was of no real importance, this is far from the truth. Michael Mullet describes here in a quote- 'What he taught was a powerful and readily understood concept of mans salvation; what he preached was preached with unique force, sincerity, simplicity and, often, vulgarity; what he wrote covers a substantial square footage of a modern library.' ...read more.

This had opened up many people's minds, starting a newer more lateral way of viewing the world. The Renaissance promoted individuals to think for themselves, to form their own opinions, something very different from the medieval system whish predated the sixteenth century. This was a time when scientific breakthroughs and education began to emerge in much higher numbers. The greatest breakthrough was most probably the invention of the movable type printing press, invented by Guttenberg in Mainz. For the first time, ideas could be mass produced and distributed to the public. The printing press allowed accurate re-production of pamphlets, books, tracts, treatises and translations which played a huge part in starting the reformation. Luther's ninety five theses were translated into German and circulated everywhere, flooding the German people with these new radical ideas. The bible was also translated into German and printed, supporting the new renaissance ideas of re-analysing the bible, rather than the churches edition. This meant that the materials were there for people to start their own 'investigations' guided by Luther's words, published in his pamphlets, his most noted three 'Address to the Christian Nobility of the German nation in August 1520, The Babylonish Captivity of the Church in October 1520 and the liberty of a Christian man in November 1520.' Luther's words could be read by all and not just heard by those he preached to directly. ...read more.

This would counter imperial intervention, giving Protestantism a powerful backing. From Luther's teachings, everyone appeared to come out on top, peasants and knights alike. The Holy Roman Empire was run by a strict system of feudalism. Peasants were losing their freedom, being worked harder by their lords, and oppression from church taxation. As stated in religious causes, peasants soon read the priesthood of all believers as a symbol of freedom, and escape from the hierarchal system that was becoming ever heavier with new need for fertile land and the increasing population. Economic causes also helped. Peasants again used Luther's message to authenticate their demands against heavy taxation by lords and to complain of the oppression. They were being heavily taxed for the war with the Ottoman Empire, leaving them little more but serfs. Princes were spurred by the opportunities of more money and land. Greed adopted the Lutheran cause. As the movement increased, during the 1530s the movement became more and more in the Princes hands, making it a much more political cause. This was not as Luther had intended, and could have been due to the flexibility of his message and that it was so accessible. The princes did however consolidate the protestant religion in Germany. As stated, it was the conditions of Germany at the time of Luther that made the country particularly ripe for this new radical reform. His message was strong enough to spread, Luther using the countries conditions to his advantage. Reform had begun. ...read more.