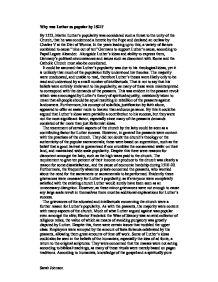 By 1521, Martin Luther’s popularity was considered such a threat to the unity of the Church, that he was condemned a heretic by the Pope and declared an outlaw by Charles V at the Diet of Worms. In the years leading up to this, a variety of factors combined to cause “nine out of ten” Germans to support Luther’s cause, according to Papal Legate Aleander.  Alongside Luther’s ideas and ability to express them, Germany’s political circumstances and issues such as discontent with Rome and the Catholic Church must also be considered.

It could be assumed that Luther’s popularity was due to his theological ideas, yet it is unlikely that much of the population fully understood his theories. The majority were uneducated, and unable to read, therefore Luther’s theses were likely only to be read and understood by a small number of intellectuals. That is not to say that his beliefs were entirely irrelevant to his popularity, as many of these were misinterpreted to correspond with the demands of the peasants. This was evident in the peasant revolt which was encouraged by Luther’s theory of spiritual equality, mistakenly taken to mean that all people should be equal resulting in rebellion of the peasants against landowners. Furthermore, his concept of sola fida, justification by faith alone, appeared to offer an easier route to heaven than arduous penance. By this it could be argued that Luther’s ideas were partially a contribution to his success, but they were not the most significant factor, especially since many of the peasants demands consisted of far more than just Reformist ideas.

The resentment of certain aspects of the church by the laity could be seen as a contributing factor for Luther success. However, in general the peasants were content with the practises of the church. They did not doubt the church’s theology or the authenticity of the popular sacramentals; these were based on superstition, such as the belief that a good harvest is guaranteed if one crumbles the consecrated wafer on their land, and maintained wide scale popularity. Despite this there were reasons for discontent amongst the laity, such as the high taxes paid to the church. The requirement to give ten percent of their income or produce to the church was clearly a reason for some dissatisfaction, and the cause of economic hardship during 1510-20. Furthermore, the frequently absentee priests concerned the peasants, who worried about the need for the sacraments or sacramentals to be performed. Evidently these grievances were necessary for Luther’s popularity, as if everyone were completely satisfied with the existing church Luther would surely have been seen as an unnecessary disruption. However, as these minor grievances were not enough to cause any large scale revolt in themselves there must be additional explanations for Luther’s success.

The grievances of the educated and intellectuals concerning the church were a further reason for Luther’s popularity. As with the peasants, the majority were content with many aspects of the church. Much of what Luther argued against was popular even amongst the elite; Elector Frederick the Wise of Saxony was an avid collector of religious relics, the value of which as means of avoiding purgatory was greatly disputed by Luther. Despite this, there were certain issues that troubled the upper class. Employers were annoyed by the amount of festa ferianda celebrated by the peasants, allowing them great amounts of time off work. Some of Luther’s ideas could also be seen in the beliefs of the humanists, especially the idea of ad fonte, a return to the original scriptures. They were concerned that the masses were not acting according to biblical teachings, as many of these rituals were merely based on pagan traditions. According to humanists, knowledge of the gospel and a spiritually pure heart was a more practical form of Christianity than these futile conventions and ceremonies. Luther’s raising of such issues gained him the support of humanists such as Melanchthon, who published ‘Loci communes’, the first systemization of Luther’s doctrines. However, many such intellectuals, despite sharing similar ideas with Luther, remained fundamentally Catholic and resented certain aspects of his doctrines such as his attack on the seven sacraments. This caused many to alienate themselves from his movement. The prominent theologian Erasmus described Luther as “rending the seamless robe of Christ” by threatening the unity of the church. Overall they were not huge contributors to Luther’s popularity, but without certain individuals that backed Luther’s teachings arguably Luther would have failed.

Moreover, the feeling of German nationalism that Luther upheld was an important contributing factor for his success. Arguably, Luther became a symbol for German pride. Extreme papal authority was a cause of the unpopularity of Rome with most Germans and many of the territorial princes were motivated to support Luther’s Reformation by possibility of independence from the Pope and bishops of Rome. The Imperial Knights also provided support for Luther, such as Ulrich Von Hutton who merged Luther’s religious teachings with his own political ideas of renewing Germany, intending to stop papal taxation to provide money for imperial armies. The amount of papal taxation was naturally a cause for resentment, which mostly went towards rebuilding the St. Peters basilica in Rome. Germany was a crucial centre for its profit as Tetzel was prevented from selling his indulgences elsewhere. However, many of the peasants were unaware of this and willing to pay this money for the promise of salvation through indulgences. Nevertheless, the conflict with Rome proved to be a significant source of support for Luther.

Additionally, a crucial factor for Luther’s gain in popularity was the fragmented and decentralised political structure of Germany at the time. With no centralised government, no sufficient effort was made to prevent of the spread of Lutheran ideas. The death of Holy Roman Emperor Maximillian meant that the attention was focused on the election of a new leader, and rather than obstructing Luther, Pope Leo X concentrated on preventing Charles V from achieving the title of emperor. In order to do this, the Pope was eager not to damage relations with Elector Frederick of Saxony, a close supporter of Luther. After the election of Charles V, the multi-national empire that he came to own distracted his attention. This meant that initially preventing Luther’s popularity was not his main concern.  As Charles was able to spend very little time in Germany, his control over its governing was not strong, which enabled Lutheran ideas and propaganda to spread.  Undoubtedly if Luther had been stopped earlier on by an efficient government, his popularity would not have been able to increase by 1521.

Furthermore, the popularity of Luther was greatly owed to the invention of the printing press.  This is evident in that previous protestors against the Catholic Church, such as Jan Hus, who lived during the 14th and 15th centuries, were unable to become as widely supported as Luther. Unlike Jan Hus previously, Martin Luther would have had an advantage with regards to the invention of the printing press for the spread of his word and his eventual gain in popularity. The distribution of pamphlets comprising Luther’s ideas across Germany enabled Luther’s word to become widely known. Unlike the 95 theses that were originally written in Latin, the majority of Martin Luther’s treatises, such as ‘The Appeal to the Christian Nobility of The German Nation’ were written in German. This was a limited reason for his success, however, as only five percent of the German population had the ability to read. Nevertheless, those who could read would have spread Lutheran ideas by word of mouth. Alternatively, it could be argued that the method which gained him his most substantial support was the utilisation of woodcuts. These carvings depicted various scenes of a degrading nature towards the Pope and the Catholic Church. The success of these was due to the fact that the illiterate were capable of understanding them and spreading the message they gave out. The humorous nature of these carvings resulted in their popularity with the peasants. The effectiveness of the printing press would have been limited if Luther did not have the additional advantage of the lack of censorship in Germany.  With no central authority in the Empire to ensure effective censorship was employed, it was made easier for Luther to publish works of a highly controversial nature. Whereas other countries with the same facilities as Germany would have stifled any attempt at a revolt with the use of censorship. On the whole, the invention of the printing press was highly significant as it gave Luther the ability to rapidly dispatch his word before the nobility began to take notice and try to stand up against it. However, the lack of literacy meant that the impact of the pamphlets distributed was reduced. Instead, the lack of censorship could be seen as a more crucial factor as it gave Luther the opportunity to spread his word more widely before being noticed.

In conclusion, there is not sufficient evidence to claim that Luther’s popularity was a result of the corrupt nature of the church, as corruption and abuses of power had been a clerical life for centuries without resulting in sufficient protest for Reform. Issues of papal supremacy existed elsewhere, therefore the unusual political situation in Germany, helped by the lack of censorship of the printing press may have been the most significant contribution to the great amount of support Luther received by 1521.