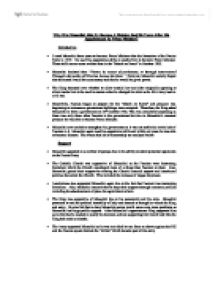 Why Was Mussolini Able To Become A Dictator Just Six Years After His Appointment As Prime Minister?

Why Was Mussolini Able To Become A Dictator Just Six Years After His Appointment As Prime Minister? Introduction * It took Mussolini three years to become Prime Minister after the formation of the Fascist Party in 1919. He used his opportunist skills to enable him to become Prime Minister. These skills are no more evident than in the "March on Rome" in October 1922. * Mussolini declared that: "Victory by means of parliament, or through insurrection? Through what paths will Fascism become the State." However, Mussolini secretly hoped that the march would be unnecessary and that he would be given power. * The King hesitated over whether to allow martial law and after originally agreeing to allow martial law to be used to restore order he changed his mind as he felt it may lead to civil war. * Meanwhile, Fascists began to prepare for the "March on Rome" and pressure was beginning to increase as government buildings were occupied. Therefore, the King asked Mussolini to form a government on 29th October 1922. This was considered surprising as there was only three other Fascists in the government but due to Mussolini's constant pressure he was able to become Prime Minister. * Mussolini now needed to strengthen his government as it was not stable due to the lack of Fascists in it. ...read more.

* This led to a number of politicians feeling intimidated by Fascism and this was used by Mussolini to his advantage. Popularity * Fascism was popular with the middle-classes as well. * Fascism destroyed the institutions of democracy that were not liked and offered an alternative to socialism and communism. * Mussolini had an appeal, he was considered a strong leader who was able to make Italy strong abroad and end Italy's political instability. Result * Mussolini needed more Fascists in the government which was unlikely due to proportional representation. Therefore, he decided to change the law and introduced the Acerbo Election Law in July 1923. This law stated that if a party had 25% of the votes then they will get 66% of the seats. There were armed "black-shirts" patrolling the Parliament building. In Parliament 303 voted for the law, 40 against and the rest abstained. * Mussolini hoped now that he could gain a majority in Parliament and called for an election. * Due to the support from the middle classes and the lack of opposition, Mussolini was confident he would gain a majority. * However, the election was corrupt. The PSI meetings were broken up and many Fascists voted more than once. The official candidates won 66% of the vote leading to 275 Fascist deputies and 100 others who supported Fascism. ...read more.

The fact that political opponents were weak due to internal division and the fact that Mussolini had made Fascism so popular with middle-classes, made it seem likely that Mussolini would gain the overall majority. However, the elections were corrupt which led to a staggering overall majority. * The death of Matteotti was key in Mussolini becoming dictator. Mussolini suffered a huge lack of support after the crisis. However, due to the King's support of Mussolini and the fact it would make it look like he made a mistake appointing Mussolini and that the King was fearful of Socialism, he did not make Mussolini resign. * This enabled Mussolini to use this event to create a stronger government and destroy any opposition to Fascism. This resulted in the Fundamental Law, which was passed due to the lack of opposition, enabling Mussolini to become even more in control. The fact that officials were now appointed led to Mussolini being able to reduce the power of the "ras". Mussolini became leader of the Fascist Party and therefore he had more power than the party itself and so he became "Il Duce". * Therefore, it can be seen that all the reasons are linked and all contribute to Mussolini being able to become dictator. However, Mussolini's opportunist political skills evident in the Acerbo Election Law and the call for a stronger government after the Matteotti crisis were vital in him becoming "Il Duce" so quickly. ...read more.