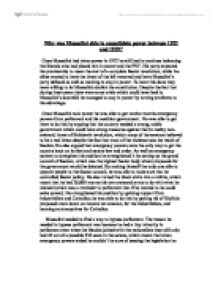 Why was Mussolini able to consolidate power between 1922 and 1929?

Why was Mussolini able to consolidate power between 1922 and 1929? Once Mussolini had taken power in 1922 he still had to continue balancing the liberals who had placed him in power and the PNF. His party expected his premiership to mean the start of a complete fascist revolution, while the elites wanted to have the threat of the left removed and have Mussolini's party defused as well as wanting to stay in power. To have this done they were willing to let Mussolini abolish the constitution. Despite the fact that during these years there were some crisis which could have lead to Mussolini's downfall he managed to stay in power by turning problems to his advantage. Once Mussolini took power he was able to get twelve months emergency powers from parliament and his coalition government. He was able to get them to do this by arguing that the country needed a strong, stable government which could take strong measures against the (in reality non-existent) ...read more.

Mussolini needed to find a way to bypass parliament. The reason he needed to bypass parliament was because he had a tiny minority in parliament even when the fascists joined with the nationalists they still only had 45 out of a possible 535 seats in the senate, which meant that when emergency powers ended he couldn't be sure of passing the legislation he wanted. The way he got past this problem was electoral reform; In July 1923 the Acerbo Law was passed. This meant that the whole country was now one large constituency, where the party winning the most seats (as long as it was more than 25%) would get two thirds of the seats. To the fascists Mussolini said this was the first step to a dictatorship and to the liberals he said it was a way to stabilise government after the previous years of chaos. However the liberals had little choice but to pass it as if they didn't they new Mussolini would abolish parliament. ...read more.

On the 3rd of January that year he gave a speech to parliament. In the speech he accepted "historical responsibility" for "all that had happened", but blamed the left for undermining the state with subversive activity. He challenged the Parliament to have him arrested using Article 47 of the constitution, which allowed ministers to be arrested, however no one all believing the king would remove him from office. The king didn't, as he didn't feel there was any acceptable replacement for Mussolini. He also brought the Liberals round by saying he would return to mass democracy by reintroducing FPTP. By getting his timing just right Mussolini was able to strengthen his position whilst weakening oppositions, between 1925 and 1928 he established his "personal dictatorship". He was able to establish his dictatorship because he had the support of the elite who saw it as a return to elitist politics, and because he strengthened key institutions. Mussolini managed to pass many legislations which increased his power most of which were written by Alfredo Rocco. The first was that he could pass ...read more.