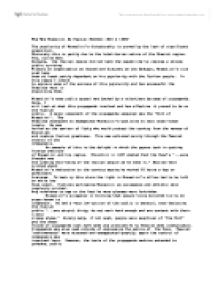 Why Was Mussolini So Popular Between 1925 & 1936? The popularity of Mussolini's dictatorship is proved by the lack of significant opposition. Obviously this is partly due to the totalitarian nature of the Fascist regime. Yet, unlike Nazi Germany, the Italian regime did not have the capability to repress a strong public uprising. Without an organisation as feared and discreet as the Gestapo, Mussolini's rule must have been at least partly dependent on his popularity with the Italian people. In this essay I intend to explore some of the sources of this popularity and how successful the Fascists were in exploiting them. Mussolini's mass public appeal was backed by a relentless barrage of propaganda. Here, I will look at what this propaganda involved and how effective it proved to be on the Italian public. A major component of the propaganda campaign was the 'Cult of Mussolini'. The Fascists attempted to exaggerate Mussolini's qualities to near super-human levels. He was hailed as the saviour of Italy who would protect the country from the menace of Socialism and restore Italian greatness. This was achieved mainly through the Fascist control of the newspapers. An example of this is the delight in which the papers took in quoting foreign admirers of Mussolini and his regime. ...read more.

Photographs were taken of school girls saluting Mussolini's residence as they walked by and many students held strong Fascist beliefs by the time they reached university. This is shown by increased membership of the Fascist party amongst young adults. However, the regime was not in place long enough to expose sufficient generations to an education full of exaggerations and half-truths. As such Italy never became a nation full of people raised by a Fascist education system and so the changes to the system never reached their full potential. Further examples of Mussolini's attempts to increase his popularity can be found in Fascist policy towards culture. The Duce wanted to incorporate Fascism into Italian culture in order to endorse his regime and also to gain intellectual credibility and therefore add to the 'Cult of Mussolini'. The regime wanted to control culture. If they succeeded in this they would gain much greater control over the Italian people. This period was known as 'the time of the carrot and the stick'. This meant intellectuals, artists, scientists and professors were first offered incentives then threatened to bring them into line with Fascist policy towards culture. 'Carrots' included the Fascist Academy which offered good jobs and fat salaries to leading professors. ...read more.

This meant the Italian Fascist regime was no longer totalitarian. From the areas I have studied in this essay it appears that most attempts to increase the popularity of Mussolini only succeeded to a certain extent. Even so, from 1925 to 1936 it appears that the Duce was personally very popular. Mussolini was seen to provide stability at home and remarks from leading foreign statesmen suggested he was successful abroad. The regime did not demand excessively from the public yet provided reasonable prosperity for the public. Foreign events, such as the successes in Ethiopia fulfilled the patriotic and nationalistic needs of the Italian nation. This suggests why, to start with, Mussolini was popular and no opposition was needed. No radical overhaul of the running of the country had occurred under the Duce's dictatorship and so few people felt the need to oppose him. It is significant that penal colonies set up by the Italian Fascists held fewer than 5 000 political dissidents while the concentration camps in the more radical Nazi Germany held several hundred thousand. This would suggest that Mussolini's popularity to the masses lay in the regime's relatively relaxed style of Fascism which did not overly intrude into the private lives of the public and placed the country under no immediate threat. ...read more.