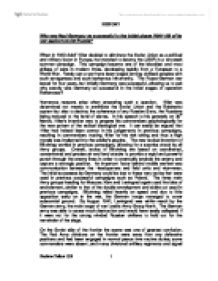 Why was Nazi Germany so successful in the initial phase (1941-42) of its war against soviet Russia?

Why was Nazi Germany so successful in the initial phase (1941-42) of its war against soviet Russia? When in 1940 Adolf Hitler decided to eliminate the Soviet Union as a political and military factor in Europe, he intended to destroy the USSR in a ten-week summer campaign. This campaign became one of the bloodiest and most pitiless of wars in modern times, developing rapidly from a European to a World War. Rarely can a war have been waged among civilised peoples with such savageness and such barbarous inhumanity. The Russo-German war lasted for four years, but initially Germany was successful, allowing us to ask why exactly was Germany so successful in the initial stages of operation Barbarossa? Numerous reasons arise when answering such a question. Hitler was determined not merely to annihilate the Soviet Union and the Bolshevist system but also to destroy the coherence of any Russian State, the Russians being reduced to the level of slaves. In his speech to his generals on 30th March, Hitler's intention was to prepare his commanders psychologically for the new pattern of the radical ideological war. It can easily be argued that Hitler had indeed been correct in his judgements in previous campaigns, resulting in commanders trusting Hitler for his risk taking and thus a high morale was implanted into the soldier's psyche. ...read more.

The whole organisation of the German army was of 1st class standard, with the added advantage of radio communications compared to the USSR's obsolete radio communications centres. Added to the disorganisation of the Red Army was that many fortifications on the Russian border was not even finished; there were 2,300 fortifications, but only less than 1000 were manned or equipped. This allowed German troops to bypass many key areas of Russia where they could easily have been challenged if the Red Army was fully mobilised. Not only this, but the attack came as a complete surprise to the leader of the Soviet Union - Joseph Stalin. Despite repeated intelligence warnings, which included the precise day and hour of Germany's incipient assault, Stalin remained convinced that Hitler would not risk an eastern war as long as the British Empire remained undefeated. It has been argued that Stalin in fact planned a pre-emptive attack on Germany for the early summer of 1941, and was then thrown off balance by the German invasion. The government at that time, although theoretically collective in form, was entirely subordinate to the will of the dictator. Stalin, cautious and doubtful, continued to appraise the situation coolly and logically. Stalin himself went into hiding - evidently he was not at all expecting an offensive from his so called 'ally'. ...read more.

Germany had the rigorously trained SS troops and were capable of fulfilling demanding operations. In contrast, the Russian army was much bigger yet didn't consist of as highly trained troops. This was evident from the huge losses of 2 million men within the initial stages of the battle. In conclusion, I believe that the successes made by Germany in 1941-42 were due to a culmination of the reasons mentioned above. Stalin was seen as a problem by many of the Russian commanders who believed in the intelligence of an imminent attack from Nazi Germany, yet they were too afraid to go against Stalin's wishes and mobilise the army. Added with this was the swift movement of German artillery and troops, which gave the German army a considerable gain in Western Russia. It could just be that Soviet Russia was simply not ready for war, hence the huge number of losses in the Red Army. However, the Red Army was fortunate that in 1942, Stalin finally decided to play a less prominent role in defence planning and discovered in a young Russian general, Zhukov, a remarkable deputy whose brusque, no-nonsense style of command, and intuitive operational sense, we indispensable in making the Red Army a better battlefield force. By 1943, the whole situation had changed - Hitler was commander - in - chief against the less dogmatic Zhukov. Soviet Russia may have started off slow, but once it transformed itself to a total war economy, defeat of the Nazi Germany was inevitable. HISTORY 1 Hashim Talbot 13B ...read more.