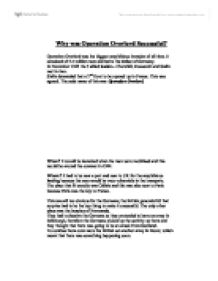 Why was Operation Overlord Successful?

Why was Operation Overlord Successful? Operation Overlord was the biggest amphibious invasion of all time. It consisted of 3.5 million men and led to the defeat of Germany. In November 1943 the 3 allied leaders- Churchill, Roosevelt and Stalin met in Iran. Stalin demanded that a 2nd front to be opened up in France. This was agreed. The code name of this was Operation Overlord. When? It would be launched when the men were mobilised and this would be around the summer in 1944. Where? It had to be near a port and near to UK for the amphibious landing because the men would be very vulnerable in the transports. ...read more.

To confuse them even more the British set another army in Dover, which meant that there was something happening soon. Plan The plan was to land on the beaches of Normandy while the parachuters captured bridges on the river Vier and Orne. This meant that the Germans couldn't attack the British army, therefore they were safe. There were 5 places called Omaha and Utah (American Army) and Gold, Juno and Sword (British army) June 4-7 was the ideal date because the tides were at their best but on the 4th, the weather was bad. Dwight D Eisenhower had been told that the storm would break on the 6th and he trusted it therefore started the invasion. ...read more.

The men had a encouraging speech from Eisenhower then were sent to their locations on the beaches of Normandy. The parachutists captured Pegasus bridge on the river Orne and many other bridges. The American parachutists were very unlucky, many drowned and some were 25 miles of course. All the landings on the beach were peaceful except the landing on Omaha where the American army met an off guard German army but still the Germans fought viciously. In the end the Americans won but with heavy damages. The armies were successful and they swung westwards towards France. On 19th of August - Paris fell. In May 1945 Germans surrendered. By Chaitanya Sanapala ...read more.