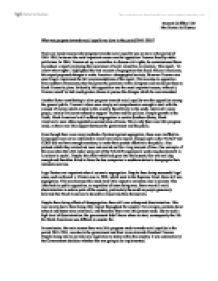 Why was progress towards racial equality slow in the period 1945?

Why was progress towards racial equality so slow in the period 1945-1955? There are many reasons why progress towards racial equality was so slow in the period of 1945-1955, however the most important reason was the opposition Truman faced by white politicians. In 1946, Truman set up a committee to discuss civil rights; he commissioned them to produce a report examining the experience of racial minorities in America. This report, 'To secure these rights', highlighted the vast amount of segregation that faced African Americans, this report proposed changes to make America a desegregated society. However Truman was unwilling to implement the full recommendations of the report. This was due to opposition from southern Democrats; they had powerful positions within Congress and would use these to block Truman's plans. ...read more.

Despite growth in the North, Black American's still suffered segregation in certain Southern States; Black American's were often regarded as second class citizens. This is why there was little progress made, as there was little support between the government and the public. Even though there were many methods of protest against segregation, these were ineffective. Campaigns were not co-ordinated to create maximum impact. Groups such as the NAACP and CORE did not have enough members, to make their protest effective to the public. Also protests which they carried out were not carried out for a long amount of time. One example of this was when the UDL (who were part of the NAACP) ...read more.

Despite there being effects of desegregation, there still was widespread discrimination. This was mainly due to there being little impact throughout the country. For example, protests about schools and buses were only small, and therefore there was little protest made. Due to such a high level of discrimination, the government didn't know where to start; consequently the life for Black Americans was difficult to counter for. In conclusion, the main reason there was little progress made towards racial equality in the period 1945-1955, was due to the government and their views towards President Truman. Despite being able to provide new legislation to states within the country, it was automatically the Governments decision whether this was going to be implemented. ?? ?? ?? ?? Hannah Griffiths 12H Mrs Davies As History ...read more.