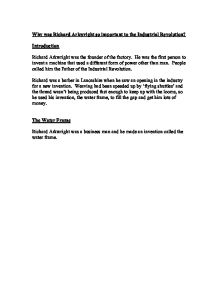 Why was Richard Arkwright so important to the Industrial Revolution

Why was Richard Arkwright so important to the Industrial Revolution? Introduction Richard Arkwright was the founder of the factory. He was the first person to invent a machine that used a different form of power other than man. People called him the Father of the Industrial Revolution. Richard was a barber in Lancashire when he saw an opening in the industry for a new invention. Weaving had been speeded up by 'flying shuttles' and the thread wasn't being produced fast enough to keep up with the looms, so he used his invention, the water frame, to fill the gap and get him lots of money. The Water Frame Richard Arkwright was a business man and he made an invention called the water frame. He used it to make the thread for the looms. ...read more.

He used advertisements to get workers and their families to come to Cromford and work for him. He wanted large families so the women and children would come and work in the factory while the men worked on the looms in the house. He built houses for the workers of his factory and chapel and schools for the children when they weren't working. Life in the factory, though, wasn't very pleasant. The people worked twelve hours a day for six days a week and started work at five o' clock in the morning. There were strict rules that you had to stick to like ......... "Any person found whistling at work fined one shilling" and "Any person found with their window open fined one shilling". On each floor there was an overseer who had a whip. ...read more.

His factory had 5 floors and contained 10 machines. It had a long room on each floor with large windows to let in lots of light. On the ground floor outside the building was a large water wheel which powered all the machines. He used dams to form large lakes/puddles to store energy for his factory. This is because the river was very unreliable and did not always turn the wheel. Very soon there were lots of Arkwright factories all over Britain, and by 1777 he had over 500 workers working for him. Conclusion Richard Arkwright was important because he introduced a new way of working and built the first factory. He also speeded up the cloth industry which meant more goods could be produced. Arkwright was a successful cotton manufacturer. He was knighted by George III. He died in 1792 aged 59. He was a very good business man and by the time of his death he had made half a million pounds. ...read more.

Some of the key points are summarised here but there is a lot of the essay that is not alluded to; the author could have answered the question more directly.