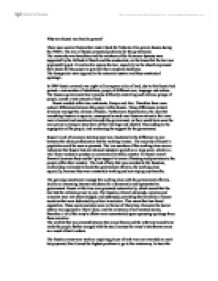 Why was Russia was hard to govern?

Why was Russia was hard to govern? There were several factors that made it hard for Nicholas II to govern Russia during the 1900's. The size of Russia presented problems for the government. The monarchy was hereditary and the members of the Romanov dynasty were supported by the Orthodox Church and the uneducated, on the bases that the tsar was appointed by god. It was hard to oppose the tsar, especially as the church expressed their desire for the people to give tsar their complete obedience. The bourgeoisie were opposed to the autocratic system and they constructed uprisings. In 1894 Russia covered over eight million square miles of land, due to this Russia had gained a vast number of inhabitants, people of different race, language and culture. ...read more.

Thus adding to the segregation of the people, and weakening the support for the government. Russia's lack of economic development was illustrated in the difference in size between the urban professionals and the working classes. The majority of Russia's population could be seen as peasants. The low numbers of the working class was an indication that Russia had not attained industrial growth on a large scale, which is a vital factor needed to produce an economically stable country. As Russia wasn't financially secure they couldn't give support in terms of housing and provisions to the people within their country. The lack of help that was awarded to the Russians, created deep animosity towards the government officials, the working class especially, because they were constantly working and not reaping any benefits. ...read more.

This meant that tsar faced opposition. These secret societies were in favour of liberalism. However the tsarist system was opposed to liberal ideas, and the existence of self created unions, therefore a lot of the army's efforts were concentrated upon repressing uprisings from these societies. The conflict that was created between the armed forces and the reformist would have made the people further enraged with the tsar, because the army's interference came as a result of tsar's orders. The Russian army were weak as acquiring places of rank were not awarded on merit but payment; this allowed the highest positions to go to the aristocracy. In turn this destabilized them, because the people in place were not sufficiently trained to carry out their jobs, and would be inadequate when faced with a problem. . ...read more.