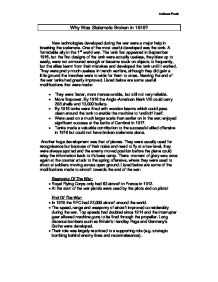 Why Was Stalemate Broken in 1918? New technologies developed during the war were a major help in breaking the stalemate. One of the most useful developed was the tank. A formidable ally in the 1st world war. The tank first appeared in September 1916, but the first designs of the tank were actually useless, they blew up to easily, were not armoured enough or became stuck on objects to frequently, but the allies learnt from their mistakes and developed the tank until it worked. They were pretty much useless in trench warfare, although they did gain a little ground the trenches were to wide for them to cross. Nearing the end of the war tanks had greatly improved. Listed below are some usefull modifications that were made: * They were faster, more manoeuvrable, but still not very reliable. * More firepower. By 1918 the Anglo-American Mark VIII could carry 208 shells and 13,000 bullets. * By 1918 tanks were fitted with wooden beams which could pass clean around the tank to enable the machine to 'unditch' itself. * Were used on a much larger scale than earlier on in the war; enjoyed significant success at the battle of Cambrai in 1917. ...read more.

The German gun, the 'Big Bertha' had a range of 120km. * Improvements in the accuracy of artillery enabled armies to adopt a 'creeping barrage'. * Improvements in communications between artillery and infantry (radio) means artillery better able to support artillery. * Generals learn to use artillery more effectively. At Somme it was spread too thinly, later it was concentrated on specific targets. * However, artillery was heavy and difficult to move. This slowed down the speed of advance and allowed the enemy to bring up reserves to slow down the advance. A German advance in technology was the U-boats. They were used to try and starve Britain into surrender. There were developed to blockade British ports and destroy cargo and transport ships. Their main role in breaking the stalemate was the fact that they were one of the main reasons that the Americans joined the war. The Germans nearly succeeded in starving Britain, but they blew a boat called the Lusitania in May 1915. 124 Americans were aboard the ship, all were killed. The Germans stopped the attack on the boats for a while after this, but started once again in 1917 in another attempt to starve Britain. ...read more.

The breakthrough of 1918 was partly down to an improvement in tactics and increased mobility. Generals learnt how to improve battle plans through bitter experience. Armies ability to take the offensive were improved due to the development of tanks, lighter machine guns and mobile mortars such as the stokes mortar. This is why the Germans pioneered storm trooper tactics which involved using small, mobile heavily armed groups of soldiers to attack weak points in the enemy line. Conclusion New Technology such as the tank, artillery, machine guns, mortars and the introduction of gas all contributed to the breaking of the stalemate, but there were still limitations to this technology; aircraft and tanks were still in their infancy and artillery was still largely immobile. Fully mechanised warfare would not arrive until the Second World War when the 'Blitzkrieg' saw rapid offensive operations. However technology was not the only factor which caused the stalemate to break. Improvements in battle tactics, communications and the American entry into the war were all just as important because many of the factors relied on each other in order to help break the stalemate. (e.g. because American troops helped the allies fight back this diverted the Germans into fighting for the spring offensive, which in turn allowed the Royal Navy to blockade German ports). Andreas Poole ...read more.