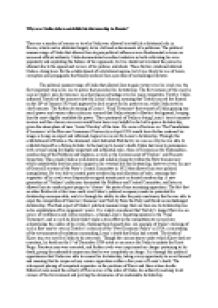 Why was Stalin able to establish his dictatorship in Russia?

﻿Why was Stalin able to establish his dictatorship in Russia? There are a number of reasons as to why Stalin was allowed to establish a dictatorial rule in Russia, which can be attributed largely to his skill and achievements of a politician. The political manoeuvrings of Stalin that allowed him to gain political influence were fundamental in terms an increased official authority. Stalin demonstrated excellent initiative in both cultivating his own popularity and exploiting the failures of his opponents, but we should not overlook the power he attained due to the appeal and success of his policies and ideals. These factors combined allowed Stalin a strong basis for the establishment of a dictatorial regime, but it was likely his use of terror, corruption and propaganda that finally rendered him a position of unchallenged dictator. The political manoeuvrings of Stalin that allowed him to gain victory over his rivals was the first important step in his rise to power that preceded his dictatorship. The first instance of this may be seen in Stalin?s pure deviousness in achieving an advantage over his main competitor, Trotsky. Stalin informed Trotsky of the incorrect date for Lenin?s funeral, meaning that Trotsky missed the funeral on the 26th of January 1924 and appeared to lack respect for his predecessor, while Stalin acted as chief mourner. The further destroying of Lenin?s ?Final Testament? that warned of Stalin gaining too much power and various other criticisms ensured that Stalin retained a flawless background, keeping him the most eligible candidate for power. ...read more.

Perhaps Stalin?s greatest point of likeability that would have lent him initial support lies within his image as a dedicated, simplistic peasant, the son of a shoemaker and married to an old Bolshevik?s daughter. This contrasted very favourably with the rest of the party that consisted mainly of intellectuals, making him more a ?man of the people?, an ideal candidate to embrace the role of dictating the dictatorship of the proletariat. Further efforts in propaganda include the formation of the ?Cult of Lenin?, in which Lenin was near-deified, reinforced by Stalin?s founding of ?The Lenin Institute? in January 1924, giving the people the impression that he, like them, considered Lenin to be the epitome of revolutionary spirit, and would do all he could to continue tradition of a Leninist dictatorship. These exercises of impressing propaganda upon the public would have led the population of Russia to feel Stalin the most relatable of any potential successor, making the acceptance and imposition of Stalin?s dictatorship an easy one, and lowering the resistance and opposition that someone taking on such a position may otherwise be concerned about. The appointment of younger, Stalinist politicians into important posts after the purges further made Stalin?s cause relatable to an enthused and indoctrinated younger generation. This assisted in the maintenance of Stalin?s absolute dictatorship and allowed him to interpret Leninism on a more abstract level and manipulate it to his own means, as younger politicians would not be well-versed in traditional, orthodox Leninism, and felt less comfortable confronting their leader about it. ...read more.

up to the standards of the European capitalist states, with such achievements as machinery output increasing four-fold, and the restoration of almost all pre-1914 outputs. The success of Stalin as a leader through his policies and the changes he made were fundamental to the development of his dictatorship, and it was because of his capability as a politician that he could achieve a political standing to exert his later efforts of terror and propaganda. There are numerous aspects to the rise of Stalin that allowed him to achieve dominance as a dictator in Russia. The role of both propaganda and terror, especially in the latter years of his establishment, are undeniable factors in his rise though were only able to be exercised once Stalin had reached a level of respect and esteem in politics through his own achievements. It may be suggested that Stalin achieved a position of influence initially through political manoeuvrings and manipulation, and through this development was then able to capture the support of the people and remaining politicians through the merit of his policies. Through a combination of support gained through successes enhanced by propaganda, and elements of terror to ensure that support was unconditional, Stalin established a dictatorship that could not be challenged. When this is focussed on the question and linked effectively, this is top class. You use examples well in places. The style is strong and you come to a fair conclusion. Your economic section loses focus a little and there is a drift into narrative in places. 14/25 ...read more.