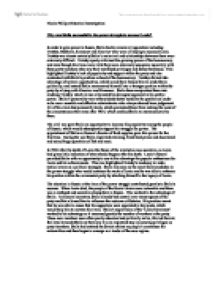 Why was Stalin successful in the power struggle to succeed Lenin?

Why was Stalin successful in the power struggle to succeed Lenin? In order to gain power in Russia, Stalin had to remove all opposition including Trotsky, Bukharin, Kamenev and Zinoviev who were all hoping to succeed Lenin. Trotsky was almost certainly Stalin's main rival and relationships between them were extremely difficult. Trotsky openly criticised the growing power of the bureaucracy, and even though his views were valid they were extremely unpopular especially with those party members who saw their newfound privileges and status threatened. This highlighted Trotsky's lack of popularity and support within the party and also contrasted with Stalin's position as head of the bureaucracy. ...read more.

The civil war gave Stalin an opportunity to increase his popularity among the people of Russia, which would subsequently support his struggle for power. The appointment of Stalin as General director of food supplies gave him power for the first time. During the war Stalin improved rationing, fixed food prices and discovered and seized huge quantities of fish and meat. In 1924 after the death of Lenin the future of the revolution was uncertain, as Lenin had given little indication of what should happen after his death. Lenin's funeral provided Stalin with an opportunity to use to his advantage the popular enthusiasm for Lenin and his achievements. ...read more.

This worked to the advantage of Stalin. As General secretary, Stalin already had control over many aspects of the party and this allowed him to influence the outcome of debates. His position meant that he was able to ensue that his supporters were appointed to key posts, which would help him to outvote his rivals. Stalin's supervision of the 'Lenin Enrolment' worked to his advantage as it increased greatly the number of workers in the party. These new members were often poorly educated and politically na�ve, this led them to feel loyal towards Stalin as they saw it as an important step in securing privileges as party members. Stalin had entered the Soviet cabinet as people's commissar for nationalities and then began to emerge as a leader of the new regime. Nicola Phillips Historical Investigation ...read more.