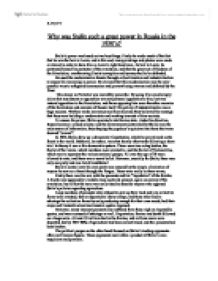 Why was Stalin such a great power in Russia in the 1930's?

Why was Stalin such a great power in Russia in the 1930's? Stalin's power was based on two key things. Firstly he made much of the fact that he was the heir to Lenin, and to this end, many paintings and photos were made or altered in order to show him as Lenin's right hand man. As heir to Lenin, he portrayed himself as protector of the revolution, and that the great act of freedom of the Revolution, overthrowing Tsarist corruption and tyranny had to be defended. He used the modernisation Russia through collectivisation and industrialisation to ensure his remaining in power. He claimed that this modernisation was the only possible way to safeguard communism and prevent being overrun and defeated by the West. This stance as Protector was incredibly powerful. By using it he could simply claim that any dissent or opposition was not personal opposition to him, but was instead opposition to the Revolution, and those opposing him were therefore enemies of the Revolution and enemies of Russia itself. ...read more.

However, many innocent peasants also suffered from these nigh on impossible quotas, and were accused of sabotage as well. Deportation, famine and death followed on a huge scale. At least 10 million died in the famine, and millions more were deported, but by 1937 90% of agriculture had been collectivised, and the peasants had been broken. The political purges on the other hand focused on Stalin's leading opponents: often well known figures. These opponents were often a product of Stalin's own suspicions and paranoia. Other rivals such as Trotsky had already been eliminated, Trotsky for example had been exiled, but others, the right wing Bukharin for example, opposed his ideas: Bukharin wanted NEP to continue hoping that the prosperity it brought would make the regime popular. The Purges started with the murder of Kirov in 1934, a Politburo member whom Stalin himself may have had murdered. However, this was then utilised as an excuse to have other opponents, real or imagined, arrested, put on show trials and eliminated/ Many prominent figures were put on trial and then shot, many of whom were Old Bolsheviks whom Stalin now distrusted. ...read more.

Instead there was an imposed loyalty to the State. Crucial to Stalin's retention of power was propaganda. He made extensive use of every form of communication available. Posters, paintings, photographs, slogans, radio and newspapers were all utilised. Visual propaganda was very important amidst a largely uneducated population with low levels of literacy. Stalin's creation of Lenin's Mausoleum was possibly the most crucial piece of propaganda. This helped Lenin to achieve iconic status among the Russian people, and therefore, with Stalin claiming to continue his work, gave Stalin greater status. There was even a personality cult. Stalin was everywhere. There was hardly a town in Russia, which did not have a statue, or portrait or posters of Stalin featured prominently. Overall, Stalin became such a great power by the removal of anyone and anything that opposed him, and re-structuring the entire country so that control of almost the entire country fell to him, either directly or indirectly. Once this sort of power is held by one man, it is incredibly difficult to remove it, and this accounts for the longevity of Stalin's power. E. Fry 5V ...read more.