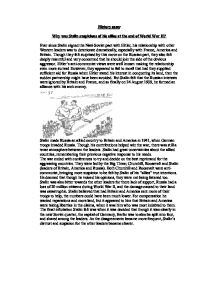 Why was Stalin suspicious of his allies at the end of World War II?

History essay Why was Stalin suspicious of his allies at the end of World War II? Ever since Stalin signed the Nazi-Soviet pact with Hitler, his relationship with other Western leaders was to deteriorate dramatically, especially with France, America and Britain. Though they felt surprised by this move on the Russian part, they also felt deeply resentful and very concerned that he should join the side of the obvious aggressor. Hitler's anti-communist views were well known making the relationship even more surreal. However, they appeared to fail to recall that had they supplied sufficient aid for Russia when Hitler stated his interest in conquering its land, then the sudden partnership might have been avoided. But Stalin felt that the Russian interests were ignored by Britain and France, and so finally on 24 August 1939, he formed an alliance with his arch-enemy. Stalin made Russia an allied country to Britain and America in 1941, when German troops invaded Russia. Though his contributions helped win the war, there was still a tense atmosphere between the leaders. Stalin had great uncertainties about the allied countries, remembering their previous negative response to his needs. ...read more.

However, by the 1940's the U.S.A had learnt a lesson, the policy of isolation was set firmly against and it was decided there would be no more appeasement of dictators, America would now react to every Communist action. The following were equally to blame for causing the Cold War: 1) The personal relationship between leaders in 1945 2) The war damage suffered by U.S.S.R 3) Stalin's takeover of Eastern Europe 4) The Truman Doctrine and Marshall Aid Do you agree with this statement? Explain your answer referring to 1,2,3 and 4. I don't totally agree with this statement because though all those points do attribute to the Cold War, they were not all equally to blame. The Cold War arose for a number of reasons, all of which are very important when realising why the Cold War occurred. The main disputes happened between the two superpowers, the U.S.A and the U.S.S.R, though generally it was Communist Russia against the Capitalist West. Each side was convinced of their superiority and believed that they had the best political system. For this reason, both sides wished to spread its influence throughout Europe and the world. ...read more.

Marshall Aid, named after General Marshall, was an organisation to supply money to poor countries likely to turn to Communism as an answer to their 'hunger, poverty, desperation and chaos.' The American General George Marshall assessed the situation and claimed an estimated $17 billion would be needed to rebuild Europe's prosperity. When Truman first put his plan to Congress it was turned down, $17 billion dollars was a lot of money and many Americans were becoming concerned by Truman's involvement in foreign affairs. But their attitude changed when the Communists took over the government of Czechoslovakia. The final push literally came when a pro-American Minister, Jan Masaryk was found dead below his window. Though Communists claimed he jumped, Americans suspected he was pushed. Immediately the Congress accepted the Marshall Plan and made $17 billion dollars available over the next four years. Though it was extremely generous of the Americans to do this, the act was seen by Russians as equally aggressive attempts to spread American power in Europe. With so much suspicion and hostility, any action claimed as self-defence by either side was perceived as aggression. The fact that both sides possessed nuclear weapons probably prevented war between them. The Cold War was at its worst, and was to last until the collapse of Communism Europe in 1989-90. ...read more.