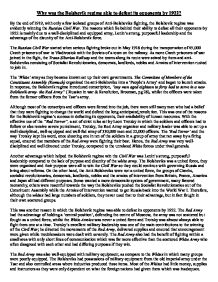 Why was the Bolshevik regime able to defeat its opponents by 1922?

Why was the Bolshevik regime able to defeat its opponents by 1922? By the end of 1919, with only a few isolated groups of Anti-Bolsheviks fighting, the Bolshevik regime was evidently winning the Russian Civil War. The reasons which lie behind their ability to defeat all their opponents by 1922 is mainly due to a well-disciplined and equipped army, Lenin's strong, purposeful leadership and the advantage of the disunity of the Anti-Bolshevik force. The Russian Civil War started when serious fighting broke out in May 1918 during the transportation of 45,000 Czech prisoners of war to Vladivostok with the Soviets of a town on the railway. As more Czech prisoners of war joined in the fight, the Trans-Siberian Railway and the towns along its route were seized by them and anti-Bolsheviks consisting of Socialist Revolutionaries, democrats, landlords, nobles and Armies of intervention rushed to join in. The 'White' army as they became known set up their own governments. The Committee of Members of the Constituent Assembly (Komuch) organized the anti-Bolsheviks into a 'People's Army' and began to launch attacks. ...read more.

Some wanted a more democratic system of government, many favored monarchy, others were resentful towards the way the Bolsheviks pushed the Socialist Revolutionaries out of the Constituent Assembly while the Armies of Intervention wanted to get Russia back into the World War I. Therefore, although the whites had large numbers of soldiers, they never used that to their advantage, but in fact fought in their own scattered groups. This was another reason in which the Bolshevik regime was able to defeat its opponents by 1922. The Red Army had the advantage of holding a 'central position', defending the centre of Moscow, the army was not scattered but fought as a united force, whilst the White Armies was never a united force and Trotsky was almost always able to fight them one at a time. Trotsky's excellent military leadership was one of the main contributions to the winning of the Civil War; he directed the movements of the Red Army, delivered supplies and ensured that encouragement were given while troublemakers were dealt with severely. ...read more.

Their fear was that the Tsar may be rescued and made leader of the White Army, which would be a very possible thing as some of the Whites consisted of nobles and landlords who wanted the old monarchy back. Thus, by executing the ex-Tsar and his family, it led to many supporters of the old government system from the Whites withdrawing from the war as their hope of restoring the old monarchy ended. With not much chance of winning the Civil War, the foreign Armies of Intervention withdrew from the war in 1919. By then most of the Whites have also withdrawn from the war, and by the end of 1919 only a few isolated groups of Whites remained fighting, who were easily crushed by the Reds. There was another revolt of 10,000 sailors at Kronstadt, in March 1921 a naval base near Petrograd in opposition to War Communism, a system of communism introduced during the Civil War to keep the Red Army supplied with food and weapons. However, the Red Army easily defeated them greatly outnumbering the sailors with 60,000 troops. The Bolshevik regime finally ended these four years of bitter fighting in the Russian Civil War. ...read more.