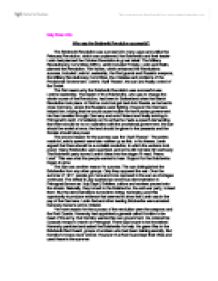 Why was the Bolshevik Revolution successful?

This was what the people wanted to hear. Support for the Bolsheviks began to grow. The war was another reason for success. The war distinguished the Bolsheviks from any other groups. Only they opposed the war. Over the summer of 1917, people got more and more opposed to the war as shortages continued. The defeat in July sparked an enormous demonstration in Petrograd (known as 'July Days') Soldiers, sailors and workers poured onto the streets. Naturally, they turned to the Bolsheviks, the anti-war party, to lead them. But the demonstrations turned into rioting. Kerensky used this opportunity to produce evidence that seemed to show that Lenin was in the pay of the Germans. Lenin fled and other leading Bolsheviks were arrested. Kerensky became prime minister. Yet more reason for the success of the revolution were the weapons and the Red Guards. ...read more.

Finally there were the mistakes and problems of the Provisional Government. They were weak because the actual power was in the Soviets. They did not listen to peoples needs and were slow to change and they were more interested in their own positions than in its peoples. They also continued the war against Germany, which led to many hardships: inflation, shortage of war products and daily necessities, shortages of peasants and horses leading to food shortages and finally heavy losses in the war against Germany. To conclude, I think that the most important was Lenin's theses because it promised to solve all of Russia's problems. He promised peace - ending the war against Germany and stopping the suffering of war. He promised land - peasants would regain the land that they worked so hard on. Finally, he promised bread - to end the food shortages, hunger and starvation. ...read more.