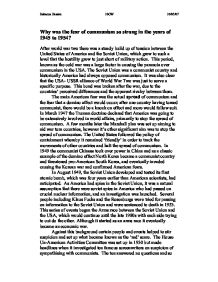 Why was the fear of communism so strong in the years of 1945 to 1954? After world war two there was a steady build up of tension between the United States of America and the Soviet Union, which grew to such a level that the hostility grew to just short of military action. This period, known as the cold war was a large factor in causing the paranoia over communism in the USA. The Soviet Union was a communist country and historically America had always opposed communism. It was also clear that the USA- USSR alliance of World War Two was just to serve a specific purpose. This bond was broken after the war, due to the countries' perceived differences and the apparent rivalry between them. The main American fear was the actual spread of communism and the fear that a domino affect would occur; after one country having turned communist, there would be a knock on effect and more would follow suit. ...read more.

This series of events began the Arms race between the Soviet Union and the USA, which would continue until the late 1980s with each side trying to out do the other. Although it started as an arms race it eventually became an economic war. Against this background certain people and events helped to stir suspicion and set up what became known as the 'red' scare. The House Un-American Activities Committee was set up in 1930 but made headlines when it investigated ten famous screenwriters on suspicion of sympathising with communists. The ten answered no questions and so were jailed for this offence and were consequently blacklisted. Alger Hiss was a prime example of those who appeared in front of the HUAC, following accusations by Whittaker Chambers. Although President Truman dismissed the case, Hiss was charged with perjury in 1950, and was jailed for five years. In the Federal Bureau of Investigation the strongly anti-Communist head, J. Edgar Hoover was given the go ahead to initiate the Federal Employee Legality Program in which 212 out three million people investigated for communist links were classed as security risks and consequently forced out of their jobs. ...read more.

This led to his censure by congress, and he died in 1957. Despite this, McCarthy's effects lived on including the McCarran act of 1950 in which all communist organisations had to be registered with the United States government and no communist could carry a United States passport or work in the defence industry. Throughout his career McCarthy ruined the careers of many others yet he never actually uncovered any real communists or Russian spy rings, even though there were several. McCarthyism was unjust and changed the course of communism long after his career had ended. In conclusion, there were many factors that influenced the fear of communism from 1945 to 1954. The most important factor was the competition between the two super powers, America and the Soviet Union, which drove both sides to portray the other as the enemy. Influencing the public was important, because with public opinion behind politicians, for example McCarthy, it made them very powerful. Rebecca Heaton 10GW 10/05/07 ...read more.