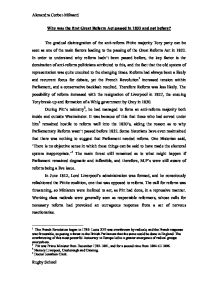 Why was the first Great Reform Act passed in 1832 and not before?

Why was the first Great Reform Act passed in 1832 and not before? The gradual disintegration of the anti-reform Pittite majority Tory party can be seen as one of the main factors leading to the passing of the Great Reform Act in 1832. In order to understand why reform hadn't been passed before, the key factor is the domination of anti-reform politicians attributed to this, and the fact that the old system of representation was quite unsuited to the changing times. Reform had always been a likely and recurrent focus for debate, yet the French Revolution1 increased tension within Parliament, and a conservative backlash resulted. Therefore Reform was less likely. The possibility of reform increased with the resignation of Liverpool in 1827, the ensuing Tory break-up and formation of a Whig government by Grey in 1830. During Pitt's ministry2, he had managed to form an anti-reform majority both inside and outside Westminster. It was because of this that those who had served under him3 remained hostile to reform well into the 1820's, aiding the reason as to why Parliamentary Reform wasn't passed before 1832. Some historians have even maintained that there was nothing to suggest that Parliament needed reform. One Historian said, 'There is no objective sense in which these things can be said to have made the electoral system inappropriate.'4 The main threat still remained as to what might happen if Parliament remained dogmatic and inflexible, and therefore, M.P's were still aware of reform being a live issue. ...read more.

On March 6th, Peel finally introduced a Catholic Emancipation Bill. This proved to many that, as Wellington had gone against his beliefs of Emancipation, what was to say that he wouldn't do the same on the issue of Parliamentary reform? As Horace Twiss said, 'Catholic Emancipation had riven the Conservative body asunder and through the chasm, the Reform Bill forced its way.' The passing of the Bill was a major Constitutional reform, and the dissenting radical M.P. William Smith said Emancipation 'appeared to have transformed a number of the highest Tories in the land to something very nearly resembling radical reformers.15 At this point, Reform appeared to be imminent. Extra Parliamentary agitation increased dramatically during the period of 1829 to 1832.16 Working class leaders favoured full male suffrage and middle class allies still distrusted democracy. Political rallies, demonstrations and pro-reform petitions increased the want for reform. The outbreak of the 'Swing riots'17 showed that the working class were beginning to take the law into their own hands, and therefore parliament felt threatened. Ministers began to think that the only way to stop revolution was to grant a Reform Bill. George IV died in June 1830, and the ensuing general election showed that Reform was important in determining strength of the government; those who dared to declare themselves against reform were beaten. ...read more.

The overthrowing of this most powerful Autocracy in Europe led to a greater emergence of radical groups everywhere. 2 Pitt was Prime Minister from December 1783-1801, and for a second time from 1804 till 1806. 3 Namely Liverpool, Castlereagh and Canning. 4 Doctor Jonathon Clark. 5 Changes made between August 1822 and January 1823. 6 Liverpool suffered a stroke in February 1827, so was forced to resign. 7 Wellington and Peel refused to serve in Cannings ministry. 8 Wellington, Westmoreland and Eldon wanted political relief for Protestants. 9 Huskisson and old Grenville supporters backed Catholic Emancipation. 10 In August 1827, Canning died and Goderich became Prime Minister. 11 Collapsed in autumn 1827. 12 Among those he dismissed was Huskisson. 13 Eric J. Evans: The Great Reform Act of 1832. 14 The rules stated that a Catholic could stand in a by-election, but not serve. 15 J. C. D Clark: English Society1688-1832. 16 Riots broke out due to failed harvest; unemployment rose and the public were in disarray. 17 The riots began in 1830. Workers began to burn hayricks and riots broke out due to a bad harvest. 18 In Bristol, rioters controlled the city for 3 days and in Nottingham, the Duke of Newcastle's castle was set on fire. The days of May began in order to stop the Duke of Wellington becoming Prime Minister, as this would mean that reform would be even less likely. People were encouraged to run to banks and demand gold. Alexandra Corbet-Milward Rugby School ...read more.